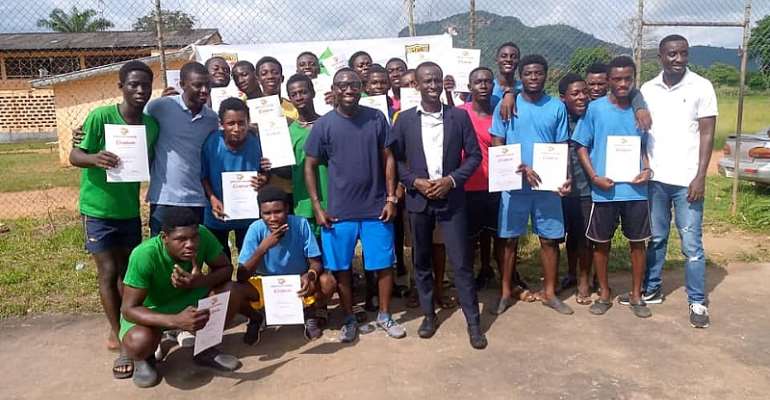 The Ghana Footvolley Association (GFVA), on Tuesday, September 21, 2021, organized the second edition of the Eastern Regional Footvolley Exhibition and Clinic at the Koforidua Secondary Technical (Sec Tech) with the assistance of the schools' PE Teacher Madam Bissi Stella and the Eastern Region President Boakye Acheampong and the Regional Executive.

The competition was categorized into two (Group A and Group B). Group A had participants from the various houses of Koforidua Sec Tech (houses one, two, three and four). Group B was made up of the winner of group A and the teams from Keta, Asuogyaman, New Juaben, Nsawam.

House one won the first competition which meant they play the Keta team in the final.

The final match was an exciting match between the Keta team and house one. Keta team emerged winners after a cagy encounter.

The event was educative and entertaining as it featured activities such as dancing competition, the Footvolley app challenge among the teams. The athletes were awarded certificates for participating.

In line with 3 seconds to 3 years agenda, the President, Mustapha Mohammed together with his executives said they are looking forward to touring the Eastern Region and organize a Footvolley League through this initiative and create their first artificial court in the region. He hopes all schools, media, Ghana will embrace Footvolley.

He said this also geared toward selecting excellent regional and district teams to represent Ghana internationally and making Ghana the office of footvolley in West Africa and Africa at large. He also urged cooperate Ghana to partner with GFVA Association to make this course a success. He said GFVA will be able to smoothly run footvolley in Africa. He also appreciated the Regional Executive for their efforts.

Among the people who graced the occasion were the Regional National Sports Authority Director, Mrs Gifty Horsu Fianu, New Juaben South Municipal P.E Coordinator Mr Kwashie Ahiafour, the General Secretary Samira Mensah who outlined the purpose of the exhibition and encourage all to part take in it.