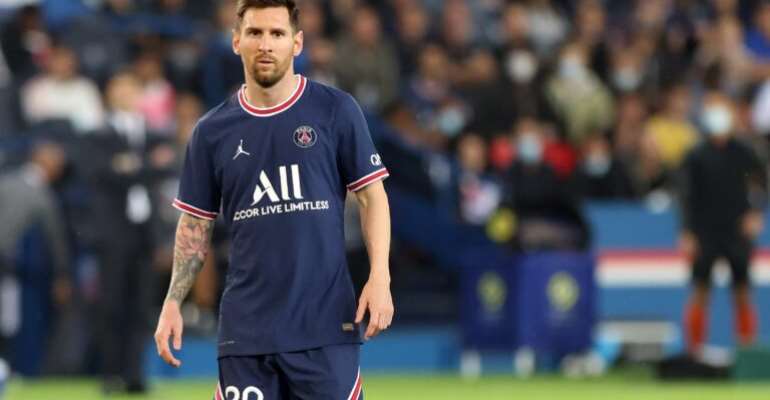 It was one of the most successful player-manager relationships of the modern era.

Pep Guardiola and Lionel Messi won 14 trophies together at Barcelona during a four-year period and the pair have been dominant forces in European football for more than a decade.

Since parting ways when Guardiola left the Catalan club in 2012, no player has scored more goals against his teams in the Champions League than Messi.

Their long-standing relationship and Messi's enduring brilliance helps explain why Guardiola tried to sign Messi in the summer. The Argentine instead ended up at Paris St-Germain and will face his former manager in the Champions League on Tuesday.

Barcelona's current struggles under Ronald Koeman are a long way from the glory years under the Catalan side's previous coaches, most notably Guardiola and his fruitful link-up with Messi.

Guardiola was promoted from boss of Barca's B team into the top job for the first team at the start of the 2008-09 season and the campaign was an unprecedented success, resulting in a Treble of trophies.

Messi scored 38 goals that term and he netted a total of 211 goals under Guardiola, including an incredible 73 in just 60 matches in 2011-12, the Spaniard's final season in charge.

"Pep immediately transmitted an enormous amount of pride in our work, ambition and hunger," Messi said.

"He won our confidence from the first day because we could see that things were being done correctly and then when results started to flow, the confidence grew with them."

The two have crossed paths since going their separate ways and will meet again on Tuesday in the group stage of the Champions League in Paris (20:00 BST).

In the past, six-time Ballon d'Or winner Messi has shown no mercy.

The Argentine has scored six goals in four Champions League games against teams managed by Guardiola - the most of any player in the competition against the current City boss.

In May 2015, Messi scored twice in the semi-final first leg and eventually helped Barca reach another Champions League final with victory over Bayern Munich, who were then managed by Guardiola.

"Messi is just incredible, really strong, really fast, back to his best just as when I used to train him," Guardiola said. "He is the best player of all time. I can compare him with Pele.

"I am very proud of the years we spent together."
Messi won the last of his four Champions League titles that year, while Guardiola has never won the competition without him, coming close last season when his City side were beaten in the final by Chelsea.

They last faced each other in the 2016 group stages when Messi ruthlessly despatched a hat-trick in a 4-0 thrashing at the Nou Camp and scored in a 3-1 loss at the Etihad.

Messi is yet to score in three appearances for PSG

The unthinkable happened in the summer.
Unable to meet La Liga's financial fair play rules, Barcelona could not renew Messi's contract and he left the Nou Camp.

He had been linked with a reunion with Guardiola at City but instead, he joined Mauricio Pochettino's PSG on a free transfer to form a formidable frontline alongside France World Cup winner Kylian Mbappe and Brazil superstar Neymar.

By the end of a remarkable transfer window, old foe Cristiano Ronaldo had also left Juventus to return to Manchester United and the Portuguese has already scored four times for the Premier League club.

It has been a frustrating start to life in the French capital for 34-year-old Messi, with fitness issues and injury meaning he has featured in just three games - completing the full 90 minutes only once - and is yet to find the net.

He appeared as a substitute for 25 minutes of his debut at Reims on 25 August and the side were held to a surprise 1-1 draw at Club Bruges in their opening Champions League group game on 15 September.

Controversy followed four days later when Messi's number went up on the substitution board as he was taken off on 76 minutes by Pochettino, with players on the bench appearing to question the decision.

"He hit the bar twice against Bruges and against Lyon. Five centimetres below and he would have scored two amazing goals," French football expert Julien Laurens said on BBC Radio 5 Live's Euro Leagues podcast.

"Unlike Cristiano, going back to a club and place he knew, Messi - we all knew - it would take some time. It would not be perfect straight away - that front three was not going to click straight away and there was already quite a bit of work in behind for Pochettino as well.

"There are lots of questions, Messi is still part of that process. He cared that he was subbed off. It is hard to say that he hasn't reached the expectations we had because he did some amazing things. But I think it will come."

Italian football expert James Horncastle added: "Man City is perfect for the first goal. Maybe that is destiny against Pep, against Man City."