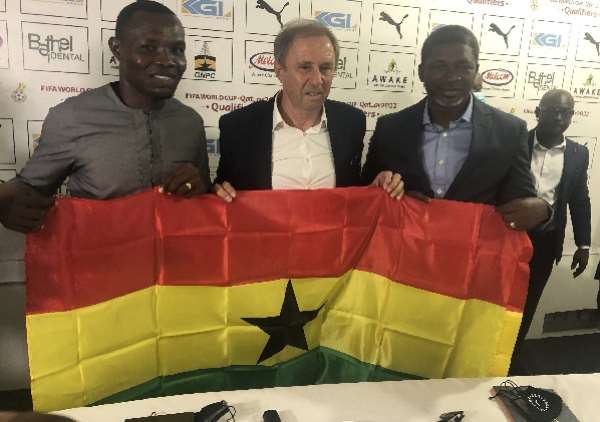 After over a week of waiting, the Ghana Football Association (GFA) on Friday, September 24, 2021, announced that it has appointed Milovan Rajevac as the new head coach of the Black Stars.

The Serbian tactician was today finally unveiled at a press conference held at the secretariat of the Ghana FA.

According to the Ghana Football Association, it has signed a one-year contract with coach Milovan Rajevac.

The contract is however renewable but dependent on the gaffer’s ability to secure qualification for the Black Stars to the 2022 FIFA World Cup tournament in Qatar.

If he is able to secure the World Cup ticket for Ghana, Coach Milovan Rajevac will be entitled to a whopping $300,000 reward from his employers.

Similarly, the coach who has been tasked to prepare a formidable team to win the 2021 Africa Cup of Nations (AFCON) tournament will pocket an additional $300,000 if he achieves the feat.

Meanwhile, after a tough bargain by the Ghana FA, it has managed to convince the new Black Stars new coach to take a monthly salary of $30,000.

It is a figure cheaper than what Coach Milovan Rajevac received as salary [35,000 euros] for the Ghana national team during his first stint between 2008 and 2010.

During the first year of his second stint with the Black Stars, the Serbian coach will be working with Ghanaian tacticians Maxwell Konadu and Otto Addo as his two assistants.