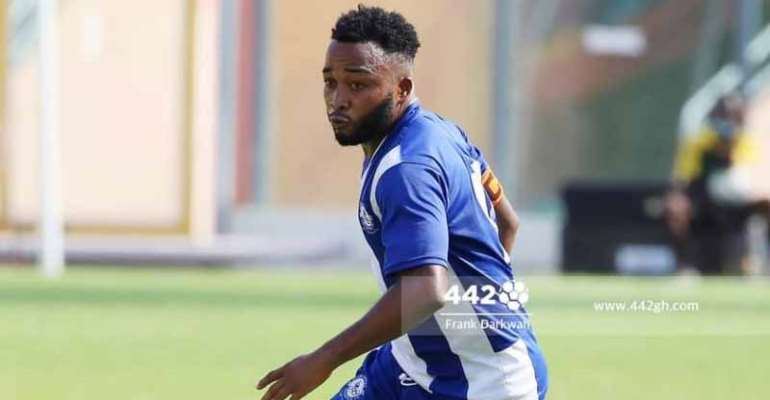 The future of Gladson Awako remains a topic in the local media after missing Hearts of Oak Caf Champions League win over CI Kamsar.

The 31-year-old is yet to make his debut after joining the Rainbow club from their city rivals, Great Olympics this summer.

Awako signed a two year deal with the Phobians in a deal worth $15,000.

However, the former Berekum Chelsea midfielder missed Hearts of Oak's 2-0 win against the Guinean side at the Accra Sports Stadium over the weekend.

According to reports, the midfielder missed the game due to illness.

He has been linked back to Great Olympics after just a month with the Phobians due to spiritual attacks.

Speaking in an interview with Accra based Rainbow FM, the Chief Executive Officer of Great Olympics Oloboi Commodore said his outfit aren’t going to refund any money to Hearts of Oak despite the latest development that surrounds the departure of their then club captain.

“Awako is Hearts of Oak player. If he decides to leave the club, it’s his decision, not Olympics decision, we sold him to Accra Hearts of Oak, and I don’t think they (Hearts) can seek any money from us,” he said.

He added that if Hearts of Oak want to return Awako to Olympics, they can negotiate.

“If Hearts think they can’t handle and don’t want him, we can have negotiations concerning his move back to Olympics,” he added.

Mr Oloboi also stated that Accra Great Olympics are looking to bolster their squad and is confident the club can find a good replacement for their departed talisman.

”We are recruiting players which we think we can find a replacement for Awako. We are hoping to be better next season with the players we have,” he stated.

Meanwhile, the representative of the U-20 World Cup winner, Yusif Alhassan Chibsah has said his client may not play for Hearts of Oak.