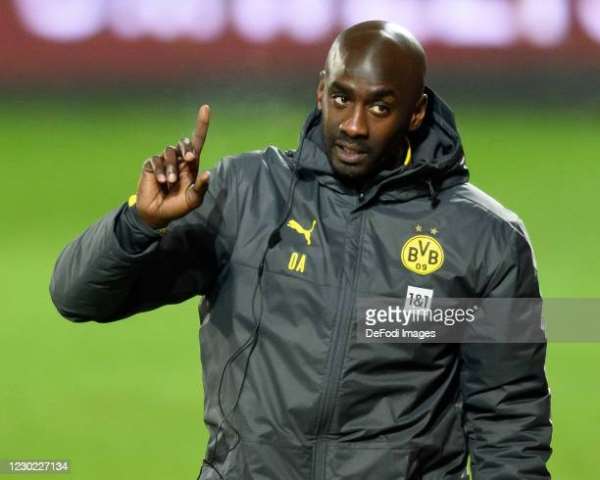 Borussia Dortmund assistant manager Otto Addo will work as the assistant coach for the Black Stars on a part-time basis, Modernghana.com understands.

The 46-year-old, who the Ghana Football Association [GFA] sees as the future of the Black Stars coach, will be unveiled alongside his incoming boss Milovan Rajevac by the close of this week.

The Executive Council of the Ghana FA settled on the pair after CK Akonnor, together with his two assistant coaches were sacked following Black Stars shaky start to the 2022 Fifa World Cup qualifiers.

As part of the long term strategy of the GFA for the national team to revert to natives of Ghana, Addo will be made to work with the Serbian to understudy him while honing his career.

The former international winger has carved a strong niche for himself in German Bundesliga having been put in charge of grooming the next generation of top players for Dortmund.

Addo is credited for the scouting reports and strategy that helped Ghana to hold eventual champions Germany 2-2 in a high profile 2014 FIFA World Cup in Brazil.

The Black Stars were the only side in the competition in Brazil to have held Germany and Addo was then the Ghana scout who prepared all the reports and strategies that helped in the major feat.

Addo represented Ghana at the 2006 FIFA World Cup in Germany before hanging his boots two years later where he has since been coaching.

In the past, he had also worked with Hamburg and Borussia Monchengladbach.

Milo and Addo's first assignment is scheduled for next month when the Black Stars play a doubleheader against Zimbabwe. Ghana sit 3rd with three points after three matches played.