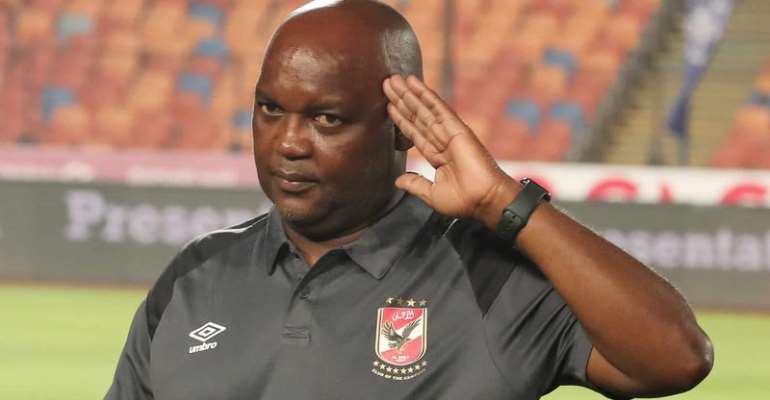 Al Ahly head coach Pitso Mosimane and his team have been fined by the club's management following the Cairo giants' shock defeat to El Geish on Tuesday evening.

The Red Devils were hoping to redeem themselves by clinching the 2020/21 Egyptian Super Cup after missing out on the Egyptian Premier League title last month which they lost to their arch-rivals, Zamalek.

However, Al Ahly were frustrated by a stubborn El Geish side and ultimately, Mosimane's charges lost 3-2 on penalties in an encounter that had ended in a 0-0 draw at Borg El Arab Stadium in Alexandria.

The result was a big shock as the Red Devils were clear favourites to clinch the trophy for a record 12th time, but they were stunned by El Geish with the Cairo-based outfit winning the Super Cup for the first time in the club's history.

Without wasting any time, Al Ahly released the following statement on Tuesday night revealing that the club's technical team, director of football, and players were fined 300,000 Egyptian pounds ($19,092).

"Mahmoud El-Khatib, Al Ahly's president, decided to impose a 300k fine on Al Ahly players, director of football and the coaching staff after the disappointing performance in the Egyptian Super Cup on Tuesday, despite the great support that the team receives to achieve titles and meet the expectations of the fans," a club statement read.

"Also, the administrative staff and the medical staff will be subjected to a fine that is relative to their salaries."

Mosimane and Al Ahly will be under pressure when they take on ENPPI FC in the Egyptian Cup Round of 16 encounter scheduled to be played at Alexandria Stadium on Saturday.

The Red Devils will then turn their attention to the Caf Champions League as they start their title defence against Niger's Union Sportive Gendarmerie Nationale in the first round tie next month.

No machinations will break ordained Alan as NPP choice for 2...
18 minutes ago