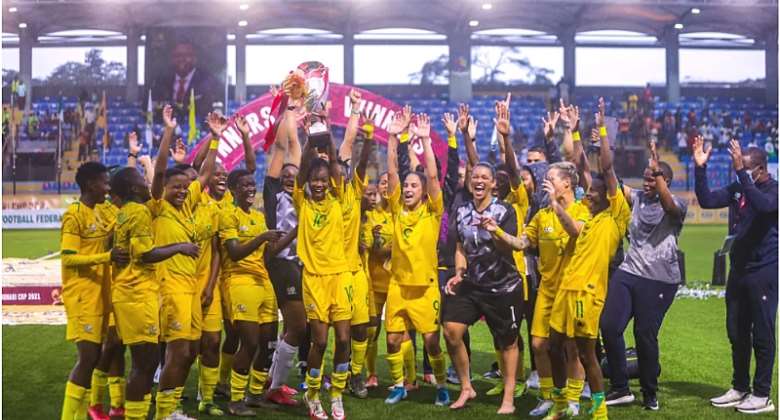 South Africa women's national team pulled off a big upset as they pipped Nigeria 4-2 to win the 2021 Aisha Buhari women's invitational tournament in the closing match at the Mobolaji Johnson Stadium, Onikan on Tuesday, September 21.

Banyana Banyana made one change to their starting XI that defeated Ghana 3-0 in the first match as Kgadiete Melinda came in for Holweni Sibulele while Ellis kept faith in their set-up with Jane Refiloe leading the attack against his Super Falcons.

Banyana had the first opportunity by the seventh minute when Kgatlana sent through a pass in the area from the left and Alozie mistakenly tapped in to hand the visitors the lead.

The South Africans piled up pressure on the Nigerian defence and eventually a high ball into the area and Onome Ebi's handball in the box gifted Banyana a penalty which Molthalo converted brilliantly from the spot in the 19th minute.

A minute from the halftime break, the rampant COSAFA Women's Cup champions condemned Nigeria to it's biggest first-half defeat on the continent when Salgado tapped in a straying deflected pass across the face of the West Africans' defence.

Buoyed by their worst start on the continent, coach Randy Waldrum made some changes to his side and substitute Ikechukwu pulled one back two minutes after the restart.

The Super Falcons maintained their high pressing for a possible comeback through combined youthful attack of Gift Monday and Ikechukwu and the latter eventually managed to reduce the deficit to one seven minutes later.

Despite the Falcons' growing hope for a possible equaliser at the closing stages, the South Africans dashed their dreams and they won a late penalty and Makhabane fired in the fourth to guarantee the shock triumph in Lagos.