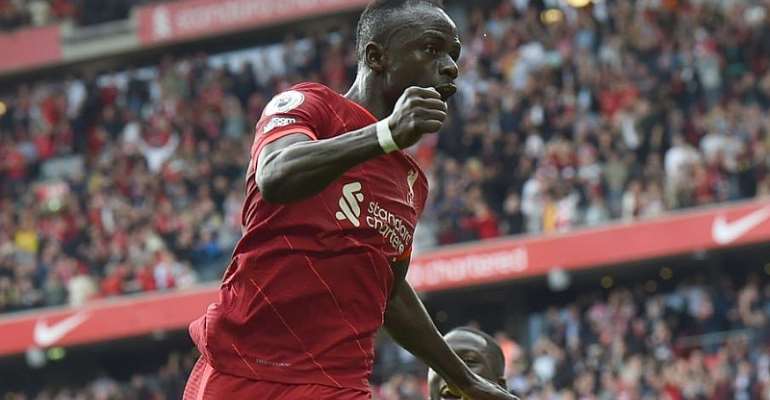 It was a memorable weekend for Sadio Mane as he bagged his 100th goal for Liverpool and became the first Premier League footballer to score in nine consecutive matches against the same opponent.

The reigning African Footballer of the Year netted in the opening half of a 3-0 triumph over Crystal Palace at Anfield.

All the goals came from African stars with Egyptian Mohamed Salah notching the second and Guinean Naby Keita scoring with a superb volley.

His close-range strike just before half-time made him the 18th man to bring up a century of Liverpool goals. "A massive achievement in the glorious history of this club," said Liverpool boss Jurgen Klopp.

The two-time African Footballer of the Year scored for the fifth time in six matches this season as Liverpool eased to victory. Salah struck 12 minutes from time, then whipped his shirt off in celebration. He also played a role in Mane's 100th goal when his header from a corner was turned in by the Senegal star.

The midfielder scored his first Liverpool goal since July 2020. Returning to form after a difficult period, he came off the bench to complete the scoring. In the 89th minute, he unleashed a sublime left-foot volley from the edge of the area that flashed past goalkeeper Vicente Guaita.

He produced an excellent performance and scored in ninth-place Rayo's 3-0 win over Getafe in La Liga. The Senegalese midfielder was one of Rayo’s stars at Vallecas, where they continued their encouraging start to the season. Ciss doubled Rayo's advantage in the second half before Falcao, formerly of Atletico Madrid, came off the bench and scored on his debut.

France-born Morocco midfielder Bourabia came off the bench to hit a long-distance injury-time winner as Spezia defeated Venezia 2-1. It was promoted Venezia's first home game since 2001-02 at their Stadio Pier Luigi Penzo ground.

The Cameroon veteran came on for Robert Lewandowski and scored the final goal in a 7-0 thrashing of Bochum, which put Bayern top of the Bundesliga. The 32-year-old, who scored four goals in a 12-0 romp against German Cup minnows Bremer last month, hit the net at his third attempt after his two rapid-fire shots had been saved by goalkeeper Manuel Riemann.

The Mali midfielder equalised for Leipzig in a 1-1 draw at Cologne to rescue a point for the visitors four days after a 6-3 Champions League thrashing at Manchester City. Haidara headed in off the post to silence the home crowd and ease the pressure on head coach Jesse Marsch, who has taken only four points from his first five games.

Senegal forward Diallo scored a first-half double as Strasbourg beat Metz 3-0 in the eastern France derby. That's three goals in the last two games for the 26-year-old, who was playing against his former club. Metz, who have a tradition of bringing through young talent from Senegal, sold Diallo last year when Strasbourg paid a club record 10 million euros.

BAMBA DIENG (Marseille)
Dieng is another Senegalese sharp-shooter fast making a name for himself in France. The 21-year-old, who came through the renowned Diambars academy, joined Marseille last October and scored on his top-team debut in a cup tie in February. He broke his Ligue 1 duck with a brace in a 2-0 win at Monaco last weekend and followed that with the opener in the 2-0 victory against Rennes.