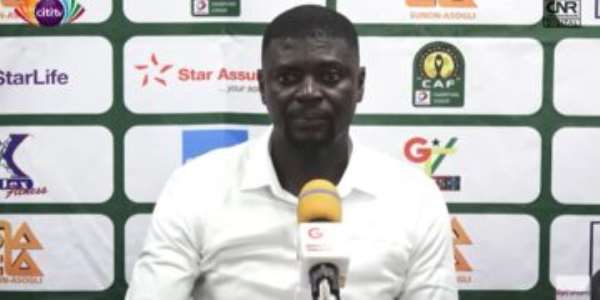 The head coach for Hearts of Oak, Samuel Boadu has admitted that his team faced a difficult test when they played against CI Kamsar in the CAF Champions League on Sunday, September 19, 2021.

The Phobians yesterday hosted the opponent from Guinea at the Accra Sports Stadium in the preliminary stage of the CAF Champions League.

Despite being the better side throughout the 90 minutes, Hearts of Oak struggled and had to wait until the last 10 minutes of the game to score two goals.

Speaking after the game, Coach Samuel Boadu who praised his players also noted that it was a tough game against a tactically disciplined opponent.

“Well, they came playing a defensive game so it was difficult to penetrate. So coming into the second half. We had to change the tactics and play high ball. They are a good team and discipline as well.

“It was a very difficult game because tactically there were very discipline,” Coach Samuel Boadu told the press after Hearts of Oak’s victory.

Now through to the next playoff stage of the CAF Champions League, Hearts of Oak are set to face Morocco Champions Wydad.