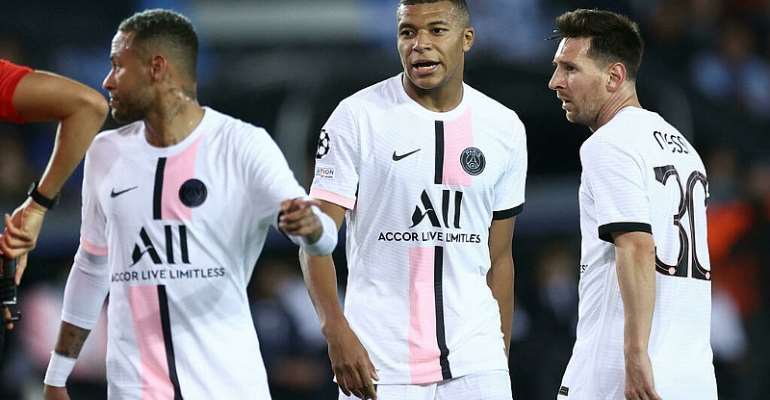 Paris Saint-Germain were on Thursday sweating over the fitness of Kylian Mbappé who hobbled off with an injury to his left foot early in the second-half of their Champions League tie in Bruges.

The 22-year-old France international left the field at the Jan Breydel Stadion on Wednesday night after falling during a challenge with Bruges defender Stanley Nsoki.

Mbappé was replaced by Mauro Icardi who failed to make the difference as the French league leaders drew 1-1 with their Belgian counterparts.

Hyped as the game in which Mbappé would be deployed for the first time up front with fellow superstar strikers Neymar and Lionel Messi, it was Bruges who took the plaudits for their guts and enterprise after falling behind to Ander Herrera's 15th minute opener.

Hans Vanaken struck the equaliser 12 minutes later for an unherladed Bruges outfit who harried their vaunted opponents to distraction and restricted Messi's surges and Neymar's rovings once Mbappé had departed the fray.

Attitude
"The problem was that we were not strong enough for a Champions League game," said PSG boss Mauricio Pochettino.

"We need to be stronger in all areas of the game. Combinations and links are not only created in training. They need to compete together to understand each other."

Pochettino will want the forward fully recovered for the second game in the Champions League against Manchester City - the team that beat PSG in last season's semi-final.

The draw in Belgium leaves PSG in joint second in Group A with Bruges after City walloped RB Leipzig 6-3 at the Etihad Stadium.

Elsewhere in the competition, in Group C, Sebastian Haller hit four as Ajax pulverized Sporting 5-1. In Group B, Liverpool came from 2-1 down to beat AC Milan 3-2 at Anfield and in Group D, the rising French star Eduardo Camavinga capped a cameo for Real Madrid by setting up Rodrygo for the late winner at Inter Milan.