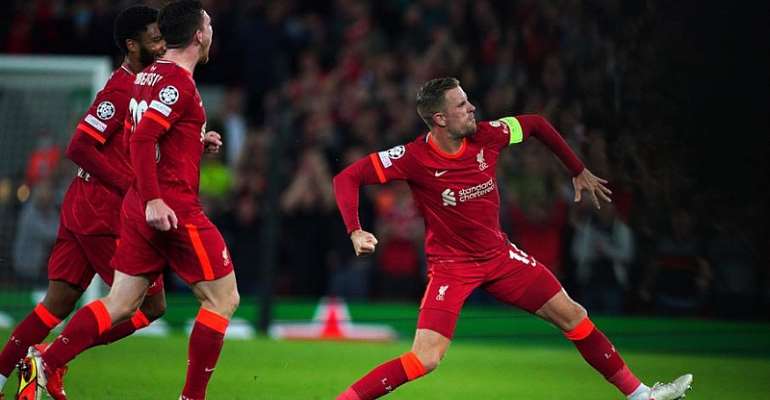 Jordan Henderson scored a stunning winner as Liverpool edged to a 3-2 victory over AC Milan in a barnstorming Champions League Group B clash at Anfield.

The Reds captain settled a rollercoaster affair 21 minutes from time with his first goal in the competition since November 2014 to ensure the Rossoneri’s return to Europe’s premier competition following a seven-year absence ended in defeat.

The hosts made a super-charged start with an aggressive, high press that led to a goal inside nine minutes as Trent Alexander Arnold’s run and shot ended up deflecting into his own net off former Chelsea defender Fikayo Tomori.

Mo Salah then blew the opportunity to double the advantage just five minutes later when he saw his penalty saved by Mike Maignan. It was the Egyptian’s first failure from the spot in 18 attempts in a period spanning almost four years.

Milan had looked shell-shocked after a one-sided half of football but put together a couple of moves to score two goals in two minutes right at the end of the half courtesy of Ante Rebic and Brahim Diaz.

Liverpool responded and were level three minutes after the restart when Divock Origi capped a rare start with an exquisite assist for Salah to redeem himself and flick home. It was the forward’s 71st goal in what was his 100th Anfield appearance and saw him move level with Steven Gerrard (14) as the Reds' joint-highest scorer in European Cup/UEFA Champions League games in L4.

The Merseysiders continued to look the more likely and Henderson produced a moment of magic when he sizzled home a half-cleared corner to earn all three points for Jurgen Klopp’s men.

Next up in Group B, Liverpool visit FC Porto while AC Milan host Atletico Madrid on Tuesday, September 28.