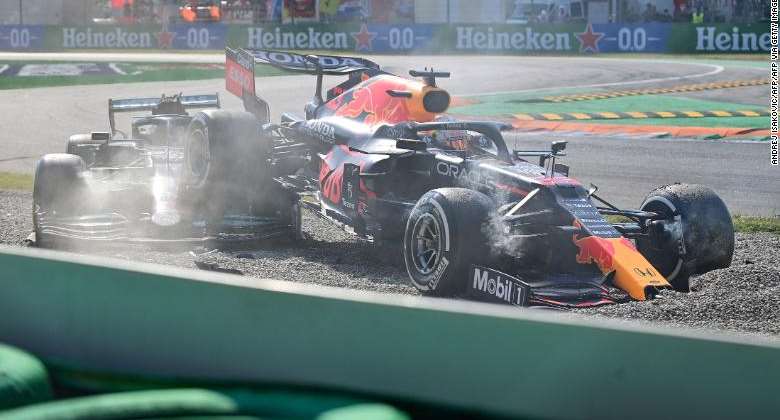 Verstappen and Hamilton collide during the Italian Formula One Grand Prix.

The Italian Grand Prix was full of drama on Sunday as Lewis Hamilton and Max Verstappen collided and were both subsequently ruled out of the remainder of the race.

The pair, who sit atop the Formula 1 driver's championship standings, were locked wheel to wheel in the 26th lap and with Hamilton looking to squeeze Verstappen of space, the Dutch driver appeared to bounce off a curb on a corner, flying into the air and landing on top of Hamilton's car.

Verstappen could be heard on his team's radio saying: "That's what you get when you don't leave the space."

Both drivers were able to walk away from the incident. The FIA, motorsport's global governing body, announced that the incident would be investigated after the race.

The two drivers had almost come in contact earlier in the race when they came wheel to wheel in a battle over second position in the opening lap.

"He pushed me wide," seven-time world champion Hamilton said over the radio.

Hamilton walks out of the track after a collision with Verstappen.

Ahead of the drama, Daniel Ricciardo produced a calm and collected performance to win his first race of the season.

The Australian overtook Verstappen before the first corner of the first lap to come from second place in the grid and led for the majority of the race.

His teammate Lando Norris made it a McLaren 1-2, finishing second ahead of Mercedes driver Valtteri Bottas.

And in celebration, Ricciardo took off his shoe, filled it with champagne and drank it. Even his teammate Norris joined in the "shoey" celebrations.

"To lead, literally, from start to finish, I don't think any of us expected that," he said afterward. "There was something in me on Friday. I knew something was good was going to come.

"For McLaren to be on the podium is good, but a one-two? This is for team papaya."

Ricciardo celebrates on the podium after winning the Italian GP.

The battle between Verstappen and Hamilton has been fiery all season.

Both have become known for their fierce battles, and that is part of the reason why they sit atop the standings this season.

Often it has been one or the other who has had to withdraw from a race after one of their battles, but in Monza, both drivers crashed out this time.

As Hamilton left the pits, he joined the track alongside Verstappen. The Red Bull driver had the wide line and has he tried to regain the racing line, his car bounced on top of Hamilton's car, with both cars coming to a stop on the gravel off the track.

Hamilton and Verstappen collide during the Italian GP.

The halo is a mandatory protection device on F1 cars. A titanium structure that shields drivers in their cockpits, the halo was developed following the death of Jules Bianchi in 2015, nine months after he suffered head injuries at the Japanese Grand Prix.

Afterward, Hamilton said he believed Verstappen could have "absolutely" backed out.

"Exactly the same scenario that happened in Turn 4, where I went around the outside, I was in exactly the same position, but I gave way," he told Sky Sports.

"And that's racing. He just didn't want to give way today. He knew when he was going into Turn 2 what was going to happen. He knew he was going over the curb but still did it. We'll speak to the stewards and we'll see."

"You need two people to work together to make the corner but unfortunately, we touched. If one guy is not willing to work, it is not going to happen," he told Sky Sports.

"It's very unfortunate what happened today but I think we our professional enough to step over it. I think for sure we can talk about it."