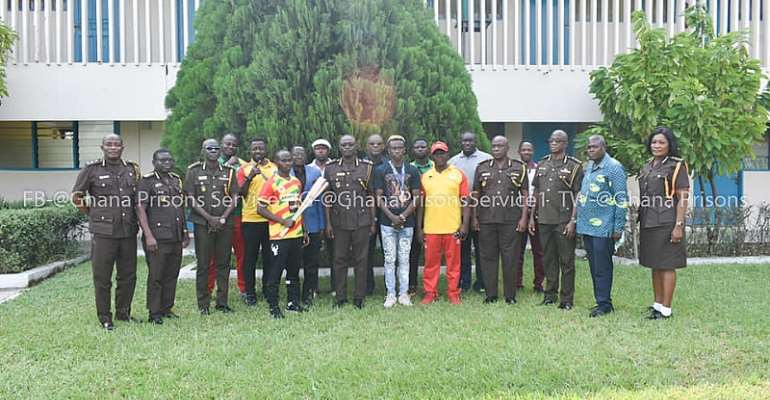 Presenting members of the team to the Prisons Directorate, at the office of Director-General of Prisons, Mr Ben Nunoo Mensah said the objective of the visit was to show appreciation to the Ghana Prisons Service for the exemplary leadership role played by Cpl Sulemanu Tetteh as the General Captain of Team Ghana at the Tokyo2020 Olympics Games and also the Captain of the National Boxing Team, BLACK BOMBERS.

"As a Prison Officer by profession and also a flyweight boxer, Cpl. Sulemanu Tetteh was the most respected athlete at the games, for his sterling leadership qualities. This I believe was as a result of the training and virtues imparted to him by the Ghana Prisons Service", he said. Mr Nunoo Mensah appealed to the Prisons administration to focus more on boxing since the Service has over the years been noted for producing award-winning boxers such as Jessie Lartey (2018 Commonwealth Games Bronze Medalist)".

The Ag. Director-Director of the Prisons, Mr Isaac Egyir thanked the team for the honour and called for a stronger partnership between the two Institutions, adding that the Ghana Prisons Service can boast of quite a number of award-winning athletes.

"Given the needed push the Ghana Prisons Service can contribute more meaningfully to the nation in the area of Sports", he stressed.

Ghana's sole medalist and Africa's only boxing medal winner, Samuel Takyi, seized the opportunity to present his medal to the Ag. Director-General of Prisons.

On his part, Mr George Lamptey, President of the Ghana Boxing Federation (GBF), managers of the Black Bombers, thanked the leadership of the Ghana Prisons Service for their continuous support to his outfit with the employment opportunities given to most sportspersons especially boxers and also availing their premises for boxing activities, which have produced a lot of them into the national team. He further pledged on behalf of the GBF to support the various prison yards with boxing rings starting with Nsawam prisons.

The rest were Shakul Samed, Light Heavyweight and Christian Amoah a 96kg Weightlifter.