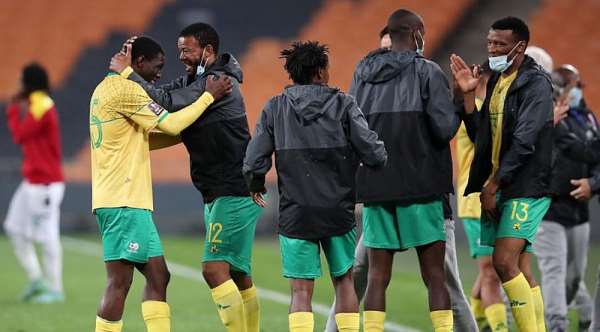 Ivory Coast moved ahead of Cameroon in Group D of World Cup qualifying thanks to a 2-1 win over the Indomitable Lions in Abidjan on Monday.

The hosts had the better of the first half, played on a very poor surface, with Ajax striker Sebastien Haller scoring twice before the break.

His first came in the 17th minute from a penalty after Jean Michael Seri's free-kick struck the arm of Cameroon captain Vincent Aboubakar as he jumped in the wall and the Algerian referee immediately pointed to the spot.

Haller doubled the lead 11 minutes later as he gathered an excellent pass behind the Cameroon defence from China-based Jean Kouassi before scoring with a low drive across Greece-based keeper Devis Epassy into the far corner.

Cameroon were the better side in the second half and pulled a goal back on the hour-mark with a penalty of their own.

Nicolas Ngamaleu sent Sylvain Gbohouo the wrong way from the spot after Eric Bailly had fouled half-time substitute Karl Toko Ekambi in the area as both leapt for the ball.

As Cameroon pushed for a late equaliser, it was Ivory Coast who had the better chances. First Fulham's Seri hit the bar with a free-kick before Epassy saved at the feet of Christian Kouame who was through on goal.

Ivory Coast move to four points from their two games, just one ahead of Cameroon. Mozambique can join the Elephants on four points if they beat Malawi on Tuesday.

Bongokuhle Hlongwane grabbed the winner for South Africa against Ghana

Earlier, South Africa scored in the 83rd minute to secure a 1-0 win over visiting Ghana to move to the top of Group G.

Ghana, who had to make several changes to the team that beat Ethiopia on Friday because of Covid-related issues, began well in Tuesday's match in Johannesburg, enjoying much of the possession.

But South Africa took the points, their winner coming as Ghana failed to clear a cross and as the ball came back into the area Bongokuhle Hlongwane touched it into the net off the post.

Bafana Bafana thought they had the lead after 37 minutes as Percy Tau headed home a cross only for the new Al Ahly striker's effort to be ruled out for offside.

Replays showed it was a tight call but with no VAR in operation, there was no review to check the linesman's decision.

A minute after the break South Africa should have scored when Evidence Makgopa somehow put the ball wide of an open goal from less than a yard out, after Ghana keeper Richard Offori let the ball slip from his hands and through his legs.

It means that after two matches, South Africa - for whom Mothobi Mvala was close with an overhead kick - have four points, just ahead of Ghana on three.

The second match in Group G is on Tuesday as Ethiopia host Zimbabwe, who will go level on points with South Africa with a win.

There was also a late winner for Liberia as they beat Central African Republic (CAR) 1-0 in Group C in an empty Japoma stadium in Douala, Cameroonian, as neither nation has a stadium fit to host international matches.

The only goal of the game came in the 86th minute as Malaysia-based Kpah Sherman hooked the ball home after CAR dealt badly with a free-kick.

Liberia should have been the 'hosts' for the match but failed to agree a deal with authorities in Cameroon over the use of the stadium.

The Liberians will play their 'home' games in Ghana in future - but since both teams were in Cameroon, it was decided CAR would be the 'home' team as they already had an agreement to use the stadium later in the qualifiers.

The other match in the group sees Nigeria aiming for two wins from two on Tuesday when they host Cape Verde.

Earlier on Monday, Uganda managed a goalless draw with visitors Mali in Kampala in Group E.

The Cranes played the final 24 minutes of the game with 10 men following the dismissal of Murushidi Jjuko for a second bookable offence.

Despite the draw, Mali remain top of the group with four points from their two matches while Uganda have two points after consecutive goalless draws.

Kenya also have two points while Rwanda are bottom, with the single point they earned on Sunday when the sides drew 1-1 in Kigali.

In Group J, veteran striker Dieumerci Mbokani was on target again for DR Congo as he opened the scoring after 12 minute in a 1-1 draw against hosts Benin in Contonou.

France-born Jordan Adeoti scored the equaliser before half-time to earn a point for Benin and keep them top of the group on four points.

The Leopards are on two points after Mbokani's goal earned a 1-1 draw on Thursday with Tanzania, who can draw level with Benin if they beat Madagascar on Tuesday in Dar-es-Salaam.

In Group A, Niger came from behind to beat Djibouti 4-2 and, like Uganda, ended the match with just 10 players on the pitch.

Niger fought back after half-time with four goals, including a brace for Ghana-based Victorien Adebayo, a penalty from Amadou Djibo Wonkoye and a fourth from Amadou Sabo.

Hassane Amadou was shown a straight red card after 83 minutes, with Djibouti making use of their one-man advantage to score a second through Warsama Hassan Houssein.

The match was played in the Moroccan capital Rabat as facilities in Djibouti, who are pointless after two games while Niger now have three, do not meet international standards.

For the same reasons, Burkina Faso will 'host' Algeria on Tuesday in another Moroccan city, Marrakech, with both sides having won their opening Group A qualifiers.

Only the winners of Africa's ten qualifying groups qualify for the play-offs next March when the continent's five finalists for next year's World Cup will be known.