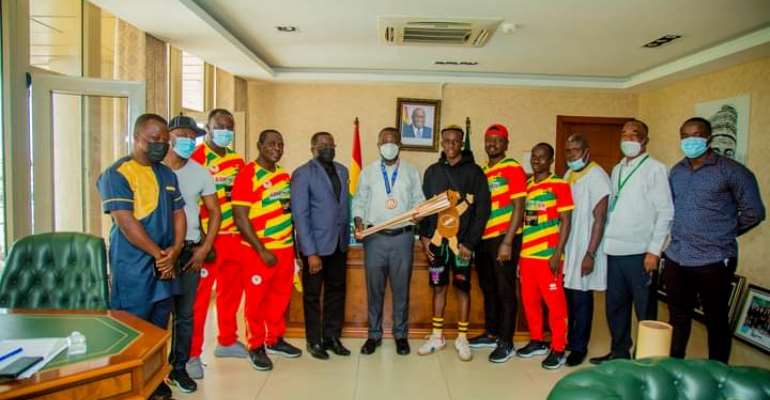 The Chief Executive (Mayor) of the Accra Metropolitan Assembly(AMA), Hon Mohammed Adjei Sowah has announced plans to set up a special fund to support Ghana's sole medalist at the just-ended Olympic Games in Tokyo, Samuel Takyi and other emerging stars from the Accra Metropolis.

He said this would be in a form of monthly stipends to help in their training and upkeep which would serve as a motivation for them to achieve their dreams.

Mayor Sowah made the announcement when the Ghana Boxing Federation- Managers of the National Boxing Team, Black Bombers and other members of Ghana's contingent for the Tokyo Olympic Games led by Ben Nunoo Mensah, President of the Ghana Olympic Committee(GOC) and President of the Ghana Amateur Boxing Federation (GBF)- George Lamptey called on him to officially present the bronze medal and Olympic Torch to him on Wednesday at the City Hall in Accra.

He admonished the Athletes present to remain disciplined and cited examples of various talents who cut short their fame in stardom due to negative attitudes and factors which seriously caused their retrogression to further greatness.

The Mayor made a personal donation of a complete set of state of the art Boxing Ring to the Ghana Boxing Federation- who are also in charge of the Management, Promotion, development and Sanctioning of Kids, Juvenile and Amateur Boxing in Ghana.

Takyi's bronze was the only boxing medal won by Africa at the Tokyo2020 Olympics Games.