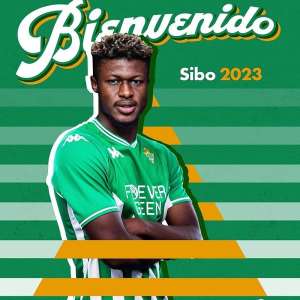 The talented midfielder has been linked with a transfer away from the English Premier League outfit in the last few weeks particularly due to his top performance for UD Ibiza last season.

On the back of successful talks between officials of Real Betis and representatives of Kwasi Sibo, the player has today completed a transfer to the Green and White outfit.

At the Spanish club, the 23-year-old is set to play with the reserve team where he will be monitored to see how he settles in.

Over the next couple of months, his performance will be assessed and based on how he fares, he could secure promotion to the senior team to play in the Spanish La Liga.

In the past. Kwasi Sibo has played for clubs including Cheetah FC, Banants FC, as well as Skënderbeu Korçë.