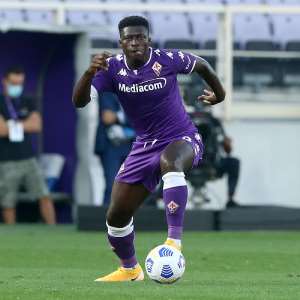 The enterprising midfielder has become surplus to requirement at Fiorentina this season. Duncan has been left out of the La Viola's squad for the season.

He is expected to undergo his mandatory medicals today before completing his move to the club tomorrow.

The 26-year-old endured a difficult spell with Fiorentina since his arrival in January 2020 from Sassuolo.

Duncan spent the second half of the 2020/21 season at Cagliari where excelled and helped them to maintain their Serie A status.

The former Inter Milan academy graduate made 19 appearances for Cagliari as they escaped the drop in the 2020/21 season.

After the expiration of the loan spell, he returned to the Florence based club.

Several clubs in Italy including Torino were interested in the midfielder but has opted to join Hellas Verona.

Ducan is however yet to receive a call-up under CK Akonnor, who is the head coach of the Black Stars.