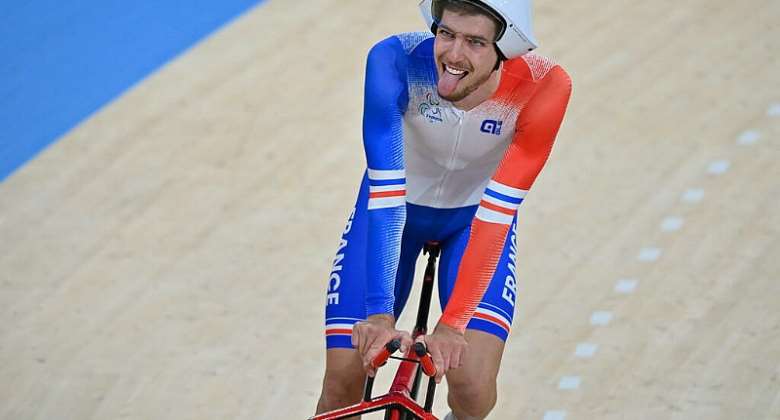 A total of 45 Paralympic golds were up for grabs on Friday, with a range of sports getting started, including archery, athletics and judo. France kept the medal count ticking over nicely, with gold and silver in cycling, and a silver medal in judo.

Alexandre Léauté added to his personal tally by taking the silver medal in the 1km cycle time trial, knocking 2 seconds off the world record for his class by finishing in 1 minute, 9 seconds and 211 thousandths of a second.

Huge message of hope, despite defeat

Afghanistan-born swimmer Abbas Karimi has sent a "huge message of hope" despite missing out on a Paralympic medal, the refugee team's chief said Friday.

Karimi, who is one of six athletes representing the Refugee Paralympic Team in Tokyo, had set his sights on becoming the team's first-ever medallist after qualifying for the men's S5 50m butterfly final.

But his hopes were dashed with a last-place finish, leaving him visibly upset as he left the pool without speaking to reporters.

"I think it sends a huge message of hope," she said.

Track and field get off to a blazing start

Jacques, who is visually impaired and runs with a guide, said his win was the culmination of five years of training.

"I have speed, I have energy. I'm naturally fast, it's genetics," added Jacques, who will also contest the 1,500m and marathon in the T11 category.

Elsewhere on Friday, Australia booked their spot in the wheelchair rugby semi-final.

The defending gold medallists suffered a shock defeat at the hands of Denmark earlier in the week, with team captain Ryley Batt admitting the loss had left his team "pretty embarrassed".

But the Steelers took down France on Thursday in a 50-48 result that rekindled their hopes of a record third consecutive gold medal.

The Australians advance despite a 57-53 loss to Japan.

Latest Photo Reports
Catch up with all the political quotes from our politicians.
Advertise here
More from Cycling
ModernGhana Links
Cowbell And Bic announce awards for cyclists who shine at 2022 Tour Du Ghana
Ghana Cycling Federation to organise Tour Du Ghana from 6th to 10th July
Tour de France leaves Denmark, plunges into 'the Hell of the North'
TOP STORIES