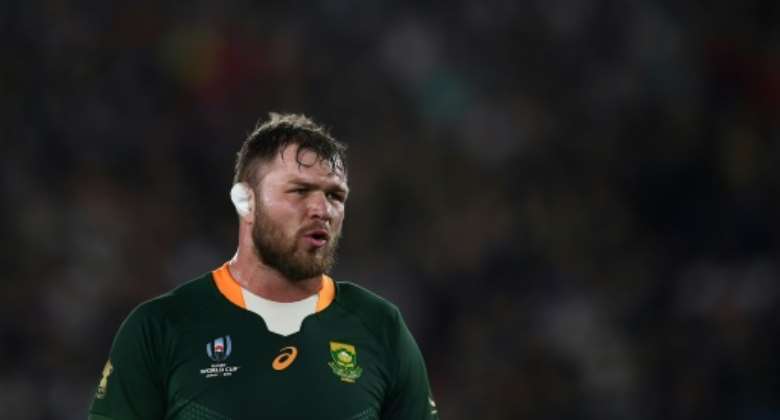 Springbok forward Duane Vermeulen has overcome an ankle injury and is available for the rest of the Rugby Championship. By CHARLY TRIBALLEAU (AFP)

Star South Africa forward Duane Vermeulen is set to play again after a serious injury as the successful but criticised Springboks head to Australia on Thursday for major Rugby Championship challenges.

The veteran back-row forward had ankle surgery in June and, after missing the six-match home leg of the world champions' season, should be available for a September 12 Test against Australia.

Home advantage often decides clashes against Australia and New Zealand will be champing at the bit to knock the long-time leaders of the world rankings off their perch.

Vermeulen acted as a 'water boy' in the two Argentina internationals and his quicker-than-expected recovery has gladdened head coach Jacques Nienaber.

"Duane has been outstanding in training and is taking contact," said the successor to Rassie Erasmus, who returned to his director of rugby role after coaching the Springboks to 2019 World Cup glory.

Although Jasper Wiese acquitted himself well in the middle of the back row during July and August, the absence of Vermeulen was felt.

The 35-year-old is not only an outstanding forward in tight and loose exchanges, but a key asset to captain Siya Kolisi when it comes to on-field leadership.

Despite a series win over the British and Irish Lions and two convincing victories over Argentina, the no-frills approach of South Africa has come under fire.

New Zealand coach Ian Foster said that watching the Springboks' second Test against the Lions "put me to sleep".

"It has become a very tight, almost risk-free type of series. Teams are almost afraid to play, they are relying on a low-risk strategy."

Columnist and former Ireland fly-half Tony Ward described much of the fare produced by the Springboks and Lions as "caveman tactics".

"The players, pretty much to a man, revert to caveman tactics in pursuit of a plan driven by over-hyped, ego-obsessed coaches."

Commentator and former England centre Jeremy Guscott labelled the Springboks "one trick ponies", believing that teams who match the South African at the breakdowns are on their way to victory.

Fly-half Handre Pollard, who contributed 64 of the 164 points scored by South Africa in six home internationals this season, was unmoved by the criticism.

"For us, it is not about entertaining. Test match rugby is about winning. At the moment, we are doing pretty well, so for now, if it is not broken, there is no need to fix it.

"We will just keep doing what we are doing and people can criticise as much as they want. We believe in it and that is the only thing that matters," was his retort.

A notable absentee when the Springboks and the Argentine Pumas board a jet to Australia will be 2019 World Rugby Player of the Year Pieter-Steph du Toit.

He underwent surgery after sustaining a shoulder injury in the second Test against the Lions when illegally tackled by South Africa-born Lions winger Duhan van der Merwe.

The flanker is now in a race against the clock to be fit for Tests in Wales, Scotland and England during November.

In his absence, Nienaber switched Franco Mostert from lock to loose forward and introduced Lood de Jager to the second row.

Apart from Du Toit, retired loosehead prop Tendai 'The Beast' Mtawarira is the only other Springbok in the 2019 World Cup final starting line-up who will not travel to Australia.