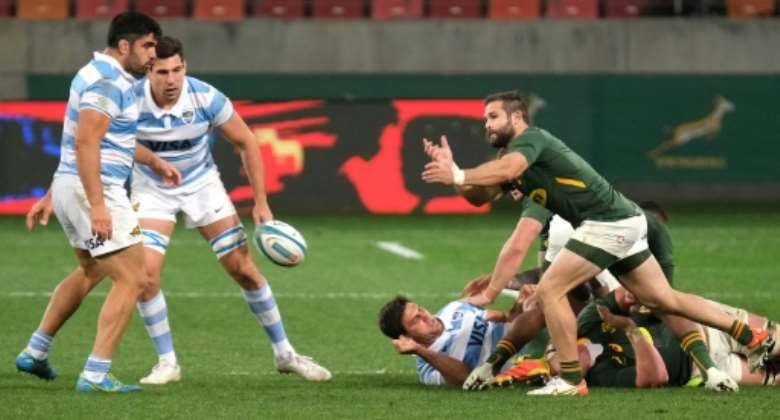 South Africa scrum-half Cobus Reinach (R) is just one of four players to remain in the starting XV from Saturday's win over Argentina. By Michael Sheehan (AFP)

South Africa coach Jacques Nienaber on Tuesday stuck to a policy of multiple changes, making 11 to the starting line-up for the Rugby Championship second-round match against Argentina this weekend.

Keen to develop strength in depth and rotate players after a gruelling three-Test series against the British and Irish Lions, Nienaber made 10 changes to the world champions' starting XV last weekend.

"A few players did not play last week after a physically demanding Lions Series and are now back in the mix," said Nienaber.

"We also wanted to give a few players who have worked hard at training over the last two months a chance to get some valuable game time.

"This is a long season, so we need to get the balance right between building consistency in selection and performances, managing the players in terms of workloads, and building depth within our squad."

Nienaber congratulated lock Lood de Jager, who will on Saturday become the fourth Springbok this season to reach the 50-cap milestone.

"Lood is a stalwart, and his work ethic is admirable, so we are excited to see him achieve this big feat," said the coach.

Only one of the Springbok backs, scrum-half Cobus Reinach, is retained for the match in Gqeberha (formerly Port Elizabeth) from the team that began against the Pumas last Saturday and won 32-12.

The backline is the same as the one which beat the British and Irish Lions 19-16 two weekends ago in Cape Town to win the series 2-1 with Reinach at scrum-half because first choice Faf de Klerk was injured.

De Klerk has since been joined on the injury list by usual second choice number nine Herschel Jantjies, so Jaden Hendrikse, who debuted last weekend and scored a try, is on the bench again.

Wiese gets another start in the back row as veteran Duane Vermeulen is recovering from an ankle operation and will be available only when the Springboks tour Australasia next month.

A new front row includes loosehead Trevor Nyakane, whose preferred position is tighthead but says he is "happy to play in any position for the Springboks, even lock".

By wearing the number one jersey, Nyakane allows Thomas du Toit, popularly known as 'The Tank' because of his formidable physique, to come into the front row on the other side of hooker Malcolm Marx.

The only uncapped player in the matchday 23 is replacement lock Nicolaas van Rensburg who, along with Reinach and recalled fly-half Handre Pollard, plays for French club Montpellier.

Both matches against Argentina are being played behind closed doors at the Nelson Mandela Bay Stadium in Gqeberha because of the coronavirus situation in the South American country.