FEATURE: Hearts of Oak must start preparation now ahead of CAF Champs League 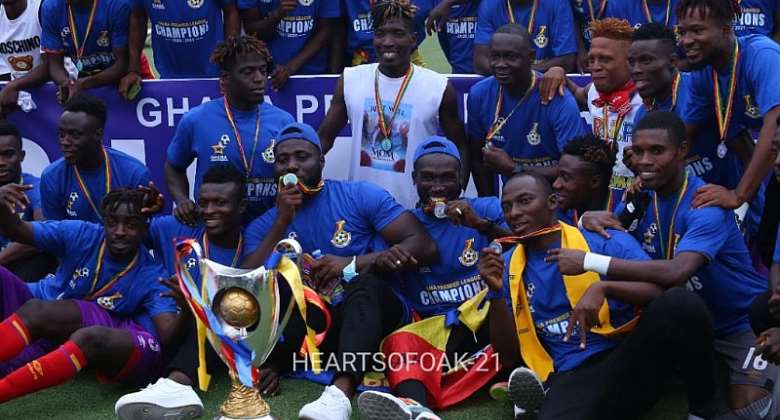 The euphoria that characterised the 2020/2021 Ghana Premier League (GPL), which saw 18 clubs battling for glory or escaping the relegation net, finally ended on Sunday, July 18, with Accra Hearts of Oak being crowned champions with 61 points from 34 matches.

Sadly, however, Dansoman-based Liberty Professionals’ 22-year presence in the GPL ended a day after Hearts were crowned champions. Liberty’s relegation was attributed to their 40 points which were not enough to keep them afloat in the league, described by football fans as one of the most keenly contested in decades.

Liberty’s scientific football in the GPL which started in 1998 nurtured and developed world-class players such as Ghana’s all-time top scorer, Asamoah Gyan, and influential midfielders in the persons of Kwadwo Asamoah, Michael Essien and Sulley Ali Muntari.

The four distinguished players, together with numerous others, whose potentials were unearthed, nurtured and developed by the founder of the club, Alhaji Ibrahim Sly Tetteh, added value to the brand of Ghana football.

Incidentally, the sudden death of Sly on September 3, 2011, had a devastating effect on the club as their fortunes in the league started dwindling until it bubbled on July 18, 2021, at the Sogakope Park, where they were held to a 0-0 draw by Alhaji Karim Grusah’s King Faisal who were also battling for survival from the relegation net.

To many GPL football administrators, battling to escape from the relegation net is as neck-breaking and gruesome as the jungle battle in the Division One League(DOL) where only the fittest had managed to survive so far to gain promotion into the GPL.

It is for this reason that many football fans are bemoaning the exit of Liberty from the GPL. To them, clubs such as Okwahu United, Venomous Vipers, New Edubiase, Real Tamale United, Bofoakwa Tano, BA United, Cornerstone, among others, which sparkled the GPL years back, have now fizzled out and considered endangered with their brand fading out among the present generation of football fans.

Besides Liberty, two other clubs that lost the battle against relegation were Cape Coast Mysterious Ebusua Dwarfs and Inter Allies. Just like Liberty, the hope of Dwarfs and Allies returning to the elite division will solely depend on their survival instincts in the DOL.

Unlike the dog fight at the bottom of the league which was finally settled during the last match at various league centres, fighting for the league title which became a two-club affair between arch-rivals, Accra Hearts of Oak, and Kumasi Asante Kotoko, was settled during the week 31 at the Accra Sports Stadium on June 27, 2021, when Hearts run away with a lone goal victory over Kotoko to widen a three-point gap between them and the Kumasi based club.

The 2020/21 GPL now belongs to history. However, the suspense it generated since it started on November 14, 2020 lives on due to its competitive nature.

Since Match Day 1 when many of the clubs fought to share the points, to Match Day 2, when Great Olympics started asserting themselves with a 3-0 victory over visiting Legon Cities, and Eleven Wonders disciplining Ebusua Dwarfs with a 2-0 victory at the Nana Ameyaw Park it continued till the last match.

It was during the last match of the GPL that the boys were finally separated from the men and eventually joined the DOL, while Hearts were crowned league champions at Sogakope with 61 points from 34 matches.

In spite of its competitive nature the just-ended football season will also go down as a competition where weak defence was so profound among many of the participating clubs, especially the bottom clubs and those that barely escaped relegation.

Berekum Chelsea, 10th on the league table with 43 points, scored 38 goals from 34 matches, but conceded 46 goals and therefore should be counted as another team with a leaking defence.

King Faisal, Elmina Sharks, Liberty Professionals and Inter Allies which placed 14, 15, 17 and 18 respectively on the league table conceded 45 goals each from 34 matches.

However, in terms of their striking prowess, Dwarfs conceded 44 goals, converted 40, with Sharks converting 34, while Liberty and Faisal scored 33 and 32 goals respectively.

It could be realised therefore that it was such leakages at their back that pushed Allies, Dwarfs and Liberty into the DOL while Faisal, Bechem United and Chelsea narrowly escaped relegation.

The defensive lapses of Faisal, Bechem United and Berekum Chelsea should be the key focus of their technical men as they prepare for next season’s league as they also devise means of sharpening their striking prowess for them to be competitive. Without that, they will be the next teams to be pushed into the soccer wilderness to give way to better ones from the DOL.

Nothing can be taken from Accra Hearts of Oak from defying all odds to win the GPL this season. From 34 matches, they won 17 times, drew 10 matches, lost seven of their matches and scored 45 goals and conceded 23.

From the above, it could be noticed that Hearts succeeded in scoring more than a goal in each of the matches played, which is a plus for their strikers. However, after scoring two goals, they also conceded one.

Since management have declared their intention of conquering Africa again, the technical brains should start building a formidable defence which can withstand the striking prowess of participating teams in Africa.

Many of the players who won the trophy for Hearts last week joined the team last year, indicating that their teamwork is not as potent as the opponents they would be meeting in the continental championships.

It is for this reason that Hearts should start their preparation for Africa now so that they would not be found wanting when the battle for glory on the continent begins.

Hottest Photo Reports
Catch up with all the political quotes from our politicians.
Advertise here
More Opinion
ModernGhana Links
Ekow Amoasi writes: Mr President, ending Ghana’s Afcon trophy drought is not about money
Ghanaians must get used to not being top dog in African football
2021 AFCON Cameroon: Playing football in the shadow of a rebellion
Lukaku Chelsea Inquest Must Be Fair
Ekow Amoasi writes: Thank you Milovan Rajevac for the Black Stars provisional squad but ‘uncompetitive’ Philemon Baffour didn’t merit a place and must not make the cut to Cameroon
Same taste of Milo, renewed World Cup hope
Release the scandalous match-fixing report now, GFA!
Open Letter to Regional Associations and Legal /Constitutional Committee of the Ghana Tennis Federation
If the centre does not hold, Milo will fall apart
TOP STORIES

We must be decisive in preventing domestic inequalities — Dr...
48 minutes ago