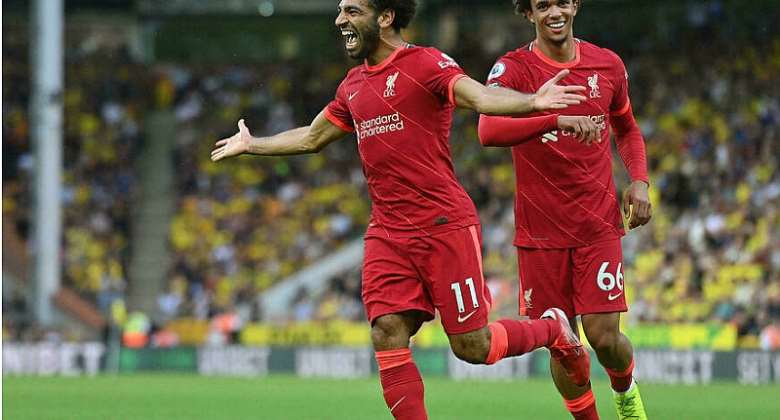 When an English Premier League season kicks off, one of the safest bets is that twice African Footballer of the Year Mohamed Salah will score.

His goal for Liverpool in a 3-0 win at promoted Norwich City raised to five the number of consecutive seasons in which he netted on the opening weekend of the most-watched football league in the world.

Senegalese Ismaila Sarr and Algerian Said Benrahma were other African scorers in the Premier League as they helped Watford and West Ham United to victories.

Salah maintained his record of scoring on the opening weekend of the season in each of his five years at Liverpool in the win at Norwich. The Egyptian had already provided two assists for Diogo Jota and Roberto Firmino before he fired into the top corner after picking up a corner at the edge of the box.

Sarr enjoyed a dream return to the Premier League with a goal and an assist as Watford beat Aston Villa 3-2. The Senegalese's pace gave Villa left-back Matt Targett such a hard time he was replaced at halftime. After teeing up Nigerian Emmanuel Dennis to score on his Watford debut, Sarr's deflected strike gave the Hornets a 2-0 lead.

Benrahma carried his excellent pre-season form into the opening weekend as West Ham twice came from behind to beat Newcastle 4-2. The Algerian headed in just his second Premier League goal for the Hammers' second equaliser early in the second half and then turned provider for Michail Antonio to complete the comeback.

Top scorer for his club last season with 18 goals, the Moroccan international needed only 19 minutes to open his account for this campaign with a well-struck penalty. He also set up one of Erik Lamela's two goals in the 3-0 win over Rayo Vallecano.

The Moroccan striker won the penalty which En-Nesyri converted in the victory against Vallecano. Idrissi was brought down by goalkeeper Luca Zidane, the son of French legend Zinedine Zidane, who was red-carded for his troubles.

The Nigerian scored one of the best goals on the opening weekend of the Bundesliga season with a superb net-buster as Union Berlin were held to a 1-1 draw at home by Bayer Leverkusen. Despite the attention of two defenders, the former Liverpool forward found enough space on the edge of the penalty area to smash the ball into the net with just seven minutes gone.

The Bonn-born German-Moroccan striker scored his first Bundesliga goal in Stuttgart's 5-1 rout of promoted Greuther Fuerth. The 30-year-old headed a cross into the net for Stuttgart's fourth.

Guinea striker Bayo took his tally to three goals in two Ligue 1 games this season as his double claimed a 2-0 win for Clermont over fellow promoted side Troyes. The 23-year-old was born in the central French town but made his international debut in March and has spent his whole career in the second division before Clermont were promoted the top-tier for the first time earlier this year.

The experienced Tunisia striker opened his account for the season with an effort after just 20 seconds as Saint-Etienne drew 2-2 at Lens. The 30-year-old, now at his fifth club after coming through Bastia's academy, scored Ligue 1's quickest goal since January 2017 at fiery Stade Bollaert-Delelis filled with 38 000 fans.

‘You got it all wrong’ – Chamber of Freight & Trade criticis...
50 minutes ago