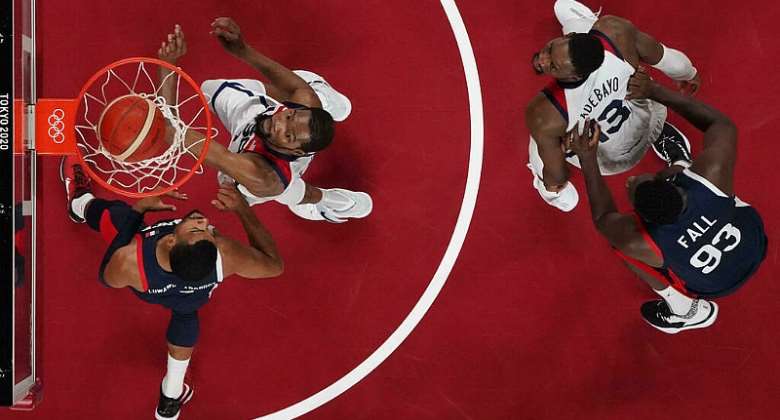 The Americans started slowly but earned a 22-18 lead after the first quarter and were 44-39 ahead at halfway, then survived some nervous late moments.

Gregg Popovich's men had headed to Tokyo after defeats to Nigeria and Australia in lead-up exhibition matches, sparking questions around their global dominance.

They then crashed to seventh-ranked France in their opening group game, their first defeat at an Olympics since the 2004 edition in Athens.

But spearheaded by Durant, they steadied the ship and began gelling, with a French team led by NBA stars Rudy Gobert, Evan Fournier and Nicolas Batum unable to repeat their opening match feat in the final.

Durant was once again the US backbone as he joined Carmelo Anthony as a three-time title-winner, both players having been members of the triumphant teams in 2012 and 2016.

He had already reinforced his stature by surpassing his fellow great during group play to become the US all-time leading Olympic points-scorer.

"This one feels good because we went through a lot," said 32-year-old Durant after the match.

Smiles after the sapping heat of Sapporo

"It feels good. I'm so, so happy because we win as Kenya," said Jepchirchir.

However, Sumgong tested positive for the endurance booster EPO in 2017, leading to an eight-year doping ban.

Two hours into Saturday's race the temperature had risen to 30.6°C with 63 percent humidity.

Jipchirchir agreed the conditions had been gruelling.

Latest Photo Reports
Catch up with all the political quotes from our politicians.
Advertise here
More from Basketball
ModernGhana Links
Celtics great Bill Russell, 11-time NBA champion, dead at 88
There must be focus on the grassroots to grow basketball in Ghana - APO Group chairman advises
NBA: Hornets bring Steve Clifford back as head coach
TOP STORIES