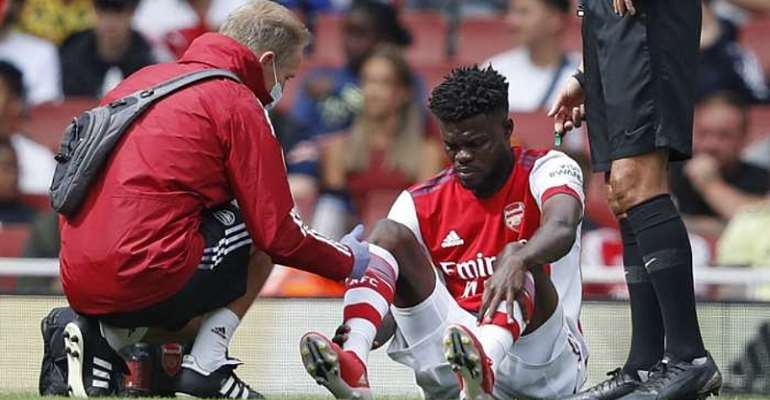 Thomas Partey is expected to miss the start of Arsenal’s season due to the ankle injury he sustained against Chelsea on Sunday.

The Ghana international was forced off after just half an hour during Arsenal’s 2-1 defeat against the Blues in the opening game of the Mind Series tournament.

Speaking after the match, Gunners boss Mikel Arteta admitted the injury "didn’t look good" and a scan on Monday has revealed Partey is now set for a spell on the sidelines.

The early results from Monday’s scan are mixed, with Partey now expected to be out for a few weeks, according to sources close to the player.

But whilst there is frustration that the midfielder will now miss at least the opening game of the new season at Brentford on August 13, there is also some relief that the initial signs suggest he will not be out for the long term.

The early indications are that he will miss ‘a few weeks’ after injuring his ankle ligaments, but that there will be no need for surgery.

Partey will see another ankle specialist later this week when the exact extent of the injury and his absence should become clearer.

Partey will certainly miss Sunday’s game against Tottenham in the Mind Series, which will be Arsenal’s last pre-season outing of the summer.

He will then also sit out the opening game of the Premier League season at newly-promoted Brentford on Friday, August 13.

Arsenal then play Chelsea on August 22 and Manchester City on August 28 and Partey will be hopeful of being involved in at least one of those fixtures, providing he does not suffer any setbacks.

Arteta does have some options in central midfield, with Granit Xhaka now staying at the club after his proposed move to Roma fell through.

A midfield duo of Xhaka and Mohamed Elneny is the most likely option to start against Brentford, although new signing Albert Sambi Lokonga impressed off the bench against Chelsea on Sunday.

Joe Willock, who is wanted by Newcastle, could also come into the equation.