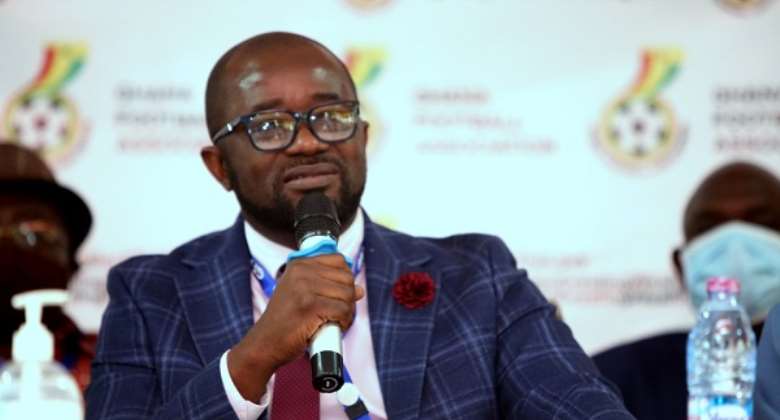 The Ghana Football Association [GFA] have lost a headline sponsorship deal worth $5m over the allegation of match-fixing.

The 2020/21 football season was staged without a headline sponsor.

However, the country's football governing body were on the verge of sealing a headline sponsor for the Ghana Premier League but the deal has been scrapped over the allegations of match-fixing.

A report by Kumasi based Pure FM indicates that the FA have lost the deal which is worth $5m.

Over the years, the Ghana FA have struggled to secure a headline sponsor for the local league due to hooliganism at the various stadia.

In the matchday 34 games, which was the last games of the season, Ashgold hosted Inter Allies at the Obuasi Len Clay Stadium.

However, the game produced a 7-0 cricket scoreline, aided by Musah’s bizarre own goals.

The first of Musah’s own goals came with Ashgold leading 5-0 in the 78th minute, with the second coming four minutes later.

The player has since justified his actions, stating in an interview with Kumasi FM that he put the ball past his own goalkeeper twice to ruin an apparent bet that had been made prior to the game, predicting a 5-1 scoreline.

He said his actions were as a result of his derision for gambling.

“I heard it in our hotel that a bet had been made for a correct scoreline of 5 goals to 1 against my club Inter Allies.

“I decided to spoil that bet because I don’t condone betting,” he is quoted as having said in the interview.

He said his technical team commended him for his actions after the game.

“After the game, my technical team commended me for spoiling the bet they had staked.

I promised my coach that if he allows me to play from the bench I will spoil the bet. And after the game, my team congratulated me.” he added.

The Ghana FA, however, said in a statement that its Compliance & Integrity Officer and the GFA Prosecutors and the Criminal Investigations Department of the Ghana Police Service would handle the matter and the two clubs involved would also be required to give their statements on the issue.

In a statement, the GFA also said it will lodge a complaint with the police for a criminal probe to commence.

The Ghana Football Association (GFA) wishes to inform all its members and the public that the Association has opened investigations into the Ghana Premier League Match-day 34 game played between Ashanti Gold SC and Inter Allies FC at the Len Clay stadium at Obuasi on Saturday, July 17, 2021. The GFA has resolved that:

1. The Compliance & Integrity Officer and the GFA Prosecutors will lead the “sporting” investigations by the GFA, and

2. The Association will further lodge a complaint on the match with the Criminal Investigation Department (CID) of the Ghana Police Service and the Ghana wing of Interpol for the criminal investigation of the game.

The Association will immediately require statements from the two clubs and the players and the technical team members of the two clubs.

The GFA further urges any member of the public, the media, players, technical team members to also send any evidence or information whatsoever connected to the match (a statement, video, audio etc) to assist the investigations through the GFA integrity Hotline and email.

GFA INTEGRITY HOTLINE As provided for in the GFA Statutes and emphasised during all the training the GFA gave to clubs and match officials before the start of the league, one of the core objectives of the Ghana Football Association (GFA) is the commitment to promote the integrity of football in Ghana.

However, both clubs in separate statements denied any allegations of betting.

Ashgold statement read: "We take notice of the video circulating in relation to our game against Inter Allies and wish to state unequivocally dissociate ourselves from any wrongdoing," a club statement on Monday read.

"Ashantigold played competitively in the entire duration of the game, with our players scoring five great goals through hard work and team effort in the 15th, 26th, 42nd, 49th and 77th respectively.

"We have no idea as to why the opponents' player scored two own goals after we were up by five goals with 13 minutes to end the game.

"We demonstrated throughout the game we were determined to play to the best of our abilities, and not to play any predetermined scoreline as it's been circulated.

"We therefore vehemently dissociate ourselves from any match-fixing and wish to urge all persons and organizations wrongfully accusing the club of match-fixing to desist from that, as we won't hesitate to take legal action against such parties.

"As a renowned sports brand, we have always believed in fair play and would continue to act in the good interest of the game."

Inter Allies, who have been relegated from the top-flight also in a quick response also said they will investigate the allegations internally.

"The attention of the management of Inter Allies Football Club has been drawn to a video in circulation concerning the Ghana Premier League game between the Club and Ashanti Gold SC at the Len Clay Stadium on 18th July, 2021.

"The Management condemns any such conduct and activity that compromises the integrity of the game.

"Without any prejudice to Ghana Football Association’s investigation, the Management of the Club has instituted an internal inquiry headed by Paul Parker Atitsogbui Esq to look into the matter and advise management accordingly.

"We wish to state that any official or player found culpable of having played any role in the said matter shall be reported to the Ghana Football Association for appropriate sanctions.

"Once again, the Management wishes to dissociate ourselves from such unprofessional conduct.

"We thank you for your attention."

My loyalty towards NPP remained intact despite being sidelin...
3 minutes ago