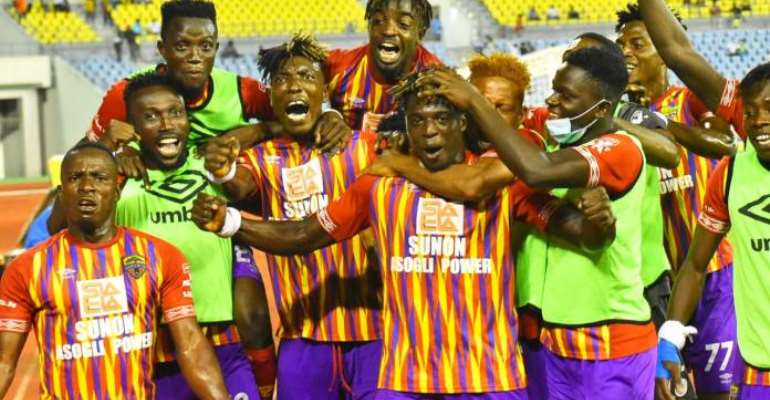 AshantiGold SC will face Hearts of Oak in the 2020/21 MTN FA Cup final.

Following a 1-1 scoreline after regulation time, three brilliant goals from Amos Nkrumah, Amos Addai and Seth Osei did the job for the Miners.

Chelsea’s resilience at the back was undone very early in the game after their player Stephen Abaidoo was shown the exit for picking a second yellow card.

Ashanti Gold capitalised on the numerical advantage to punish their opponents with three quick goals as Frank Akoto and Osei Agyemang prevented Chelsea from setting up any kind of late comeback.

At the same venue, Hearts of Oak have booked a place in the MTN FA Cup final after beating defeated Medeama on Sunday evening.

Samuel Boadu's side recorded a 3-0 win over the Yellow and Mauve in the second semifinal game.

After a pulsating opening exchanges, Benjamin Efutu gave Samuel Boadu’s men the lead by the 12th minute after meeting a cross from his teammate.

After the break, Hearts doubled their lead against the run of play through Isaac Mensah. Medeama goalkeeper Frank Boateng missed a clearance he anticipated, leaving his post at the mercy of Mensah who calmly slotted the ball into the empty net.

Hearts made it 3-0 from the spot by the 72nd minute through Afriyie Barnie. The midfielder’s initial effort was saved by Medeama goalkeeper Boateng but referee Yao Bless rewarded him a retake which he beautifully sent the goalkeeper wrong way.

The final of the FA Cup will be played on August 8 at the Cape Coast Sports Stadium.