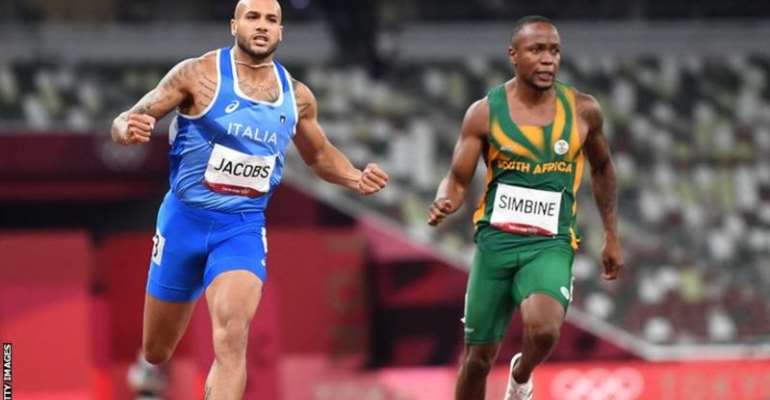 Boxer Samuel Takyi has guaranteed himself at least a bronze medal to secure Ghana's first Olympic medal since the men's football team won bronze at the 1992 Games in Barcelona.

South Africa's Akani Simbine misses out on a medal as he finishes fourth in the men's 100m final with Nigeria's Enoch Adegoke pulling up before the finish line with an injury.

Another Nigerian, Tobi Asuman, reached the final of the women's 100m while Kenyan duo Ferguson Rotich and Emmanuel Korir will be in the race for a medal in the men's 800m.

South Arica's Wayde van Niekerk qualified for Monday's semi-finals of the men's 400m as he bids to retain his Olympic title.

Five African athletes will be in Wednesday's final of the women's 3,000, steeplechase as Nigeria's Ese Brume qualifies for the women's long jump final.

Egypt won a fourth match at the Games to finish second in Group B of the men's handball tournament and will play Germany in Tuesday's quarter-finals.

Ghana's Samuel Takyi won his featherweight quarter-final 3-2 on points over Colombia's Ceiber David Segura to guarantee himself at least a bronze medal in Tokyo.

The 20-year-old will now face the USA's Duke Ragan on Tuesday in the semi-finals, with the winner going on to fight for the gold medal and the loser settling for a bronze.

Three of Ghana's four Olympic medals have come in boxing with Clement Quartey winning a silver in 1960, Eddie Blay and Prince Amartey claimed bronzes at the 1964 and 1972 Games respectively.

Takyi's medal will be the only one for Africa in men's boxing in Tokyo.

The only other African boxer with a chance of a medal is Algeria's Imane Khalif in the women's lightweight division. She faces Ireland's Kellie Harrington in Tuesday's quarter-finals with the winner guaranteed at least a bronze.

South Africa's Akani Simbine ran 9.93 seconds as he finished fourth in the men's 100m final, which was won by Italy's Lamont Marcell Jacobs in 9.80s.

The USA's Fred Kerley claimed silver with Canada's Andre de Grasse winning the bronze, as he did at the 2016 Games in Rio.

Nigeria's Enoch Adegoke pulled up after 50 metres with an injury and did not record a time.

It means that Namibia's Frankie Fredericks remains the only African to have won an Olympic 100m medal when he claimed silver at the 1992 Barcelona games and again four years later in Atlanta.

Earlier on Saturday Adegoke had qualified automatically for the final as he was given second place in the second semi-final after a photo finish separated him from the USA's Trayvon Bromell, with both men given a time of 10.00 seconds.

However, also in the second semi-final, South Africa's Shaun Maswanganyi finished sixth as he failed to progress to the final.

South Africa's Simbine had progressed but only as one of two fastest losers as he finished fourth in the third semi-final in a time of 9.90 seconds.

Ivory Coast's Atrthur Cisse could only finish seventh in the third semi-final and failed to reach the final.

Kenya's Ferdinand Omwurwa Omanyala missed out on the final despite breaking his own national record again, which he set in Saturday's heats, with a time of 10.00 seconds as he finished third in the first semi-final.

The time for the 25-year-old, who had battled to be included in the Kenyan team for the games, was not enough for him to progress as a fastest loser.

Also in the first semi-final, Nigeria's Usheoritse 'Dushos' Itsekiri pulled up with a hamstring injury a few metres from the finish line, with South Africa's Gift Leotlela doing the same as he crossed the line.

Nigeria's commonwealth champion Tobi Asuman won the first semi-final of the women's 100m hurdles to qualify for Monday's final, with the fourth-fastest time.

Liberia's Ebony Morrison set a new national record of 12.74 seconds in the third semi-final but could only finish sixth in her heat and will not progress to the final.

There was drama in the third semi-final of the men's 800m when Botswana's 2012 silver medallist Nijel Amos inadvertently clipped the USA's Isaiah Jewett as both fell to the track on the final bend.

Kenya's Ferguson Rotich avoided the collision to win the race and qualify for Thursday's final, while Morocco's Oussama Nabil was fourth and did not progress.

In the first semi-final, Rotich's compatriot Emmanuel Korir managed to dip over the line to clinch second place and so claim an automatic place in the final.

Earlier on Sunday Korir had been disqualified from the men's 400m heats for a false start.

A new national record for Tunisia's Abdessalem Ayouni was not enough for him to advance as he finished sixth in the heat with Morocco's Abdelati El Guesse last.

Kenyan Michael Saruni failed to advance as he was sixth in the second semi-final, which was won by Australia's Sudan-born Peter Bol.

After his fall Amos said: "I still can't put my head around it. I am crazy about it, but that is 800. These things happen.

"I got a clip on the leg and it is always (about) the timing, but it just sucks it happened this time around. I thought I was in a good position to take this heat and I can't put words on it."

Both South Africa's Sokwakhana Zazini and Algeria's Abdelmalik Lahoulou failed to progress to the final of the men's 400m hurdles after finishing sixth and fifth respectively in their semi-finals.

South Africa's Wayde van Niekerk made it through to Monday's semi-finals of the men's 400m as he began his quest to retain the Olympic title that he won in a world record time at Rio 2016.

He is joined in the semi-finals by Botswana duo Isaac Makwala and Leungo Scotch.

Kenya's world record holder for the women's 3,000m steeplechase, Beatrice Chepkoech, qualified from the heats for Wednesday's final along with compatriot Hyvin Kiyeng, who won silver at the Rio Olympics.

They will be joined in the final by Ethiopians Zerfe Wondemagegn and Mekides Abebe as well as Uganda's Peruth Chemutai.

Nigerian Ese Brume's leap of 6.76m with her last attempt saw her achieve the automatic qualifying distance of 6.75m to reach Tuesday's final of the women's long jump.

Egypt's men won their fourth match in Tokyo as they finished second in Group B after a 30-20 victory over Bahrain.

The Egyptian's only loss in the group phase came at the hands of world champions Denmark 32-27.

Egypt will now face Germany, who finished third in Group A, in Tuesday's quarter-finals.

The Egyptian captain Ahmed Elahmar admitted facing Germany will be a tough task.

"If you want to go for a medal, you are going to face the toughest opponents," he said.

"This will be my last Olympics (he is 37) so I am looking forward to ending on a high."

South Africa's Christiaan Bezuidenhout and Zimbabwe's Scott Vincent ended the men's event among the competitors tied for 16th after Sunday's final round.

They ended on 11 under par, seven shots behind the USA's gold medallist Xander Schauffele.

Another South African, Garrick Higgo finished on even par to end in a tie for 53rd out of the 60 golfers who took part in Tokyo.

It means Tunisia finish bottom of Group B and will not progress to the quarter-finals.

South Africa women's Group A campaign came to an end with a fourth straight loss in Tokyo as Australia emerged 14-1 winners. It leaves the South Africans bottom of the group without a single point and a goal difference of -90.