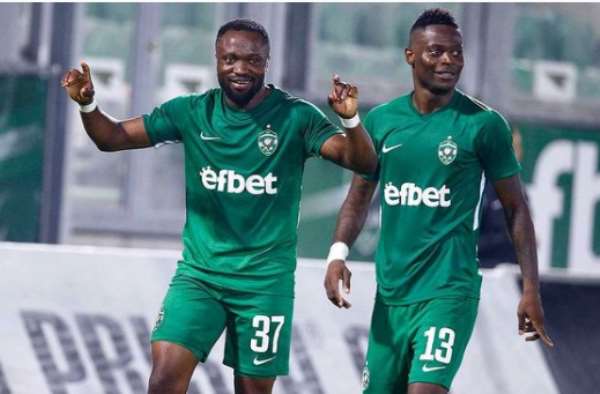 The Ghanaian duo of Bernard Tekpetey and Elvis Manu continued their fine form in Bulgaria on Saturday evening as they both scored to propel Ludogorets Razgrad to defeat CSKA 1948 Sofia 3-0.

The two players have been in tremendous form since the 2020/2021 Bulgarian Parva Liga season commenced.

Handed starting roles in the Ludogorets team to face CSKA 1948 Sofia today at the Huvepharma Arena, both players were instrumental and helped the side to make it two wins out of two matches.

On the matchday, Bernard Tekpetey equalized in added time of the first half to shoot the hosts into a deserved lead.

After recess, Ludogorets maintained the momentum to score two more goals. Dorin Rotariu scored in the 65th minute to double the lead for the side before striker Elvis Manu netted the final goal eight minutes later to seal the big victory.

With both Ghanaian attackers finding the back of the net today, they will be expected to feature for Ludogorets in mid-week when the team takes on Olympiacos in the third qualifying round to the Uefa Champions League group stages.