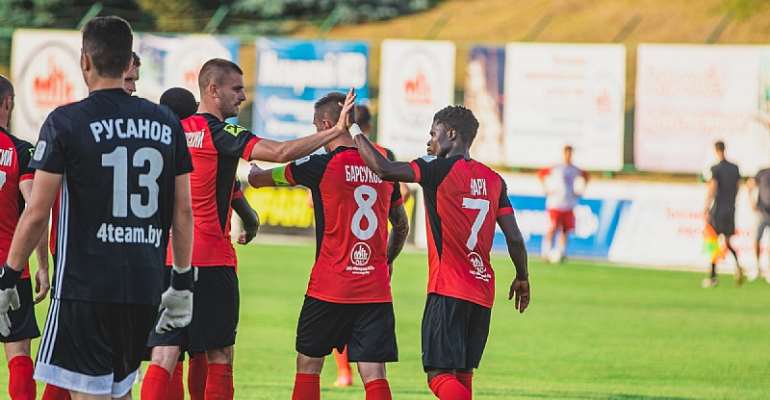 Ghanaian international, Francis Narh equalized for Slavia Mozyr on Saturday afternoon when the team recorded a 2-0 win away at FC Smorgon in the Belarusian Premier League.

The former Tema Youth star and his team have struggled in the ongoing football season in Belarus but are hopeful of picking up crucial points to enhance chances of climbing higher on the league table.

Today at the Yunost Stadium, the team made a giant step in that regard although they played away from home.

On the matchday, Francis Narh started for Slavia Mozyr on the flanks and caused the needed damage with his smart play to trouble the defense of FC Smorgon.

Scoring with a fine strike a minute into the second half, the forward doubled the lead for the visitors to add to Vladimir Esin’s equalizer from the first half.

Today’s win keeps Slavia Mozyr away from the relegation zone of the Belarusian Premier League.

Meanwhile, Francis Narh has taken his goal tally for this season to five. He remains one of the best players for his team this season.