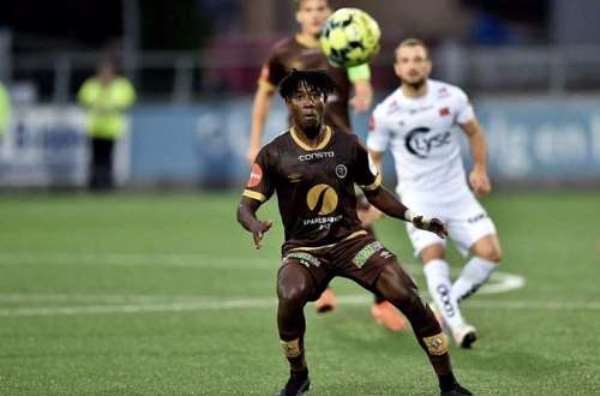 Ghana international, Isaac Twum starred for his Mjøndalen IF outfit on Wednesday afternoon when the team suffered a narrow 2-1 defeat to Stabaek in the Norwegian Eliteserien.

The former Inter Allies FC man today started for his team when they hosted their matchday 13 opponent of the 2021 Norwegian top-flight league at the Consto Arena.

Going on to last the entire duration of the game, Isaac Twum bossed the midfield as his passing and interception helped to advance the course of Mjøndalen IF.

Despite ending up on the losing side at the end of an exciting contest, the midfielder finished the game as the highest-rated player according to data recorded by renowned statistics providers SofaScore.

On the matchday, Simen Wangberg opened the scoring for Stabaek in the 39th minute when he was assisted by Sturla Ottesen

Later in the second half, the visitors increased their lead when Oliver Edvardsen and Kornelius Hansen combined for the second goal.

In added time, Benjamin Stokke equalized for Mjøndalen IF but it was not enough to save the side from suffering the defeat.

Today’s result means that Isaac Twum and his team stay in the 13th position on the Norwegian Eliteserien.