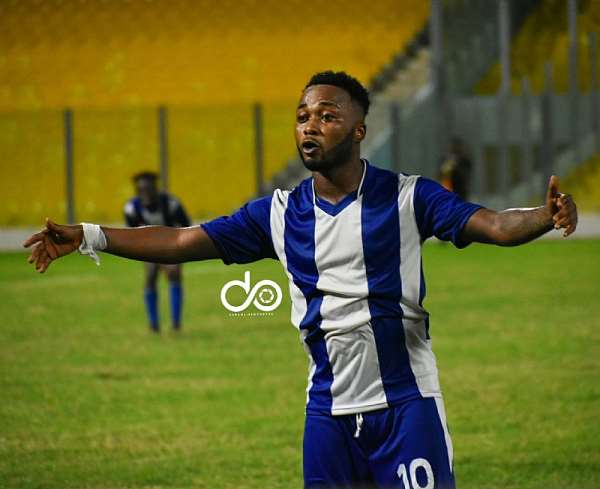 Accra Great Olympics inspirational captain, Gladson Awako has disclosed that he will leave the club for a new challenge elsewhere.

The skilful and silky midfielder was a key figure for the 'Dade' lads in the just ended Ghana Premier League.

After the end of the season, the U-20 World Cup winner has linked to several clubs in the country with Hearts of Oak leading the race to sign the 26-year-old.

Asante Kotoko and Medeama SC are also interested in the midfielder.

.However, the former Berekum Chelsea and Phonix Rising Star midfielder speaking in an interview hinted that he is aiming for a new challenge elsewhere despite six months left on his contract at the club.

"Every layer wants a new challenge in his life," he told Asempa FM.

"Harry Kane started his career at Tottenham Hotspurs but he now wants to leave the club because he is craving for a new challenge because he knows with Manchester City, he is guaranteed trophies and will play in the Champions League every season.

"I have offers from Medeama SC and Hearts of Oak but I will make the right decision at the right time. European clubs have all expressed interest in me and for me, I think I want to move on and experience something new.

"I will always be grateful to Great Olympics because they gave me the platform and the chance to play but I think it is time for me to move," he added.

Awako bagged four Man of The Match award and player of the month award once.

He was named in CK Akonnor's squad for Ghana's final two 2020 Africa Cup of Nations [Afcon] qualifiers against South Africa and Sao Tome.

Awako excelled against Sao Tome when he was introduced to the game in the second half.

Meanwhile, Great Olympics finished the season on the 6th position with 52 points.

MMDCE appointments shouldn't be seen as job for the boys' - ...
22 minutes ago