Baba Rahman: Is there a Chelsea future for Ghana star under Tuchel? 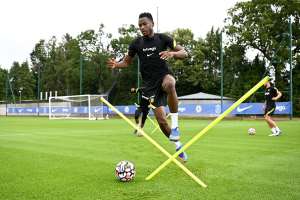 Chelsea’s 2-1 win at Bournemouth was enjoyable not just for the returning away supporters at the Vitality Stadium, but also for the neutrals watching from a distance.

The intensity of the match was unlike any pre-season encounter, which probably pleased Thomas Tuchel following his pre-match comments regarding effort and industry. Having, more or less, indicated his plan regarding substitutions before kick-off, there was an interest to see how substitutes would fare after their introductions.

The aforementioned included Abdul Rahman Baba, back at the club after a successful loan spell in Greece with PAOK. Baba interestingly played at left wing-back at times for the eventual cup winners, so this meant he’d be an option for Tuchel who has utilised several variations of a 3-4-3 since taking charge in West London.

There was some disappointment that the Ghanaian wasn’t one of the seven half-time Chelsea changes at the Vitality, with the German tactician keeping Marcos Alonso in that role for another 18 minutes.

Baba eventually got his chance after the hour but struggled to get into the game.

It didn’t help that he was introduced at a time where the Blues struggled to cope with the Cherries seizing control following Tuchel’s changes in midfield. After utilising Connor Gallagher and Danny Drinkwater in tandem in the opening half, the former sat deeper with Ruben Loftus-Cheek and Ross Barkley on either side as free 8’s after the interval.

This limited the West African by extension as Scott Parker’s men swarmed all over the visitors, wresting control in the second 45. Baba barely got a kick after his introduction and was crucially on the back foot in the build-up to Bournemouth’s goal.

David Brooks and Jack Stacey created a two-v-one situation, exposing the wing-back who was then slow to close down Stacey’s ball into the six-yard box that led to the Cherries going ahead.

The game initially looked to passing Baba by, and the first time he galloped forward seemed to end in a loss of possession following a heavy touch. However, he didn’t give it up and after exchanging passes with Loftus-Cheek, sent a delicious cross into the box for Armando Broja to level in the 71st minute.

Bournemouth were only ahead for five minutes and the assist reminded Blues fans of Rahman's quality deliveries from wide positions.

While there was a sense the Cherries could exploit his flank with Jake Clarke-Salter equally looking shaky, nothing materialised for the rest of the match and Tuchel’s team came from behind to secure the win.

It remains to be seen where that performance leaves the 27-year-old.

Pre-season only just got going with several players returning at the weekend with the English and Italian contingent yet to return.

In that sense, Baba gets ample time to make an impression on the former Paris Saint-Germain boss before Ben Chilwell and Emerson Palmieri are back at Cobham. The presence of four left wing-back options may prove to be the African’s undoing especially as he finds himself bottom of the pecking order.

Of course, this may well change, owing to continued reports over Emerson’s future with Napoli and other Serie A clubs routinely interested in bringing him back to Italy’s top division. There have also been reports that the Blues may include the former Roma defender in any deal involving Sevilla centre-back Jules Kounde, although that remains uncertain.

Given that Chilwell is going nowhere having only arrived from Leicester City last summer, a future for the 27-year-old at Stamford Bridge requires sales of the Euro 2020 winner and Alonso, who theoretically took his place in the squad five years ago.

The Spain wing-back still has two years left on his contract, too, so a departure is unlikely for the 2016/17 Premier League champion.

Thus, it hasn’t been surprising to see rumours of the West African’s exit this summer. A loan return to old side Augsburg has been mooted by Kicker given the injury problems of current left-back options Iago and Mads Pedersen, leaving Markus Weinzierl’s team to consider Baba as a prospective solution.

Even though Olympiacos are also said to be interested in a temporary deal, one would understand why the Ghana left-back would prefer a return to his old stomping ground over another switch to Greece.

A place at Chelsea may be complicated to attain for the fit-again Baba, but suitors are growing for the defender who hopes his injury hell is behind him as he looks to enjoy a fulfilling 2021/22, at Stamford Bridge or beyond.