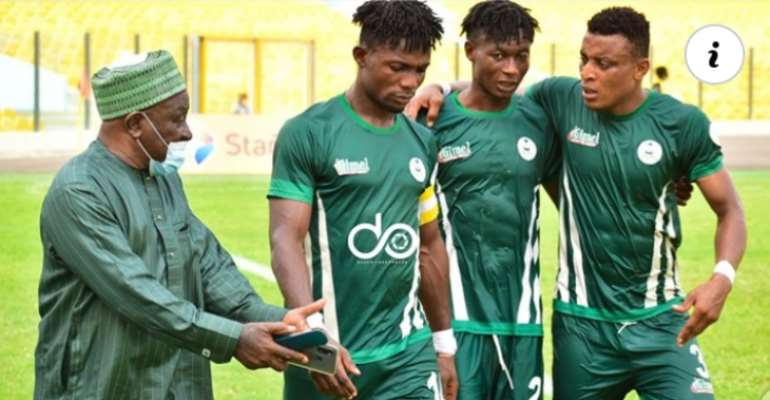 Alhaji Grusah, the bankroller of King Faisal beleives the lack of funds crippled their season.

The 'Insha Allah' boys endured a torrid campaign but saved the season on the last day of the season.

King Faisal held Liberty Professionals to a 0-0 drawn game at the Sogakope Park to escape relegation.

The veteran football administrator speaking in an interview admitted that the hack of funds was a major headache for the club despite maintaining their Premier League status.

''The lack of sponsorship in the league affected every club and we were badly affected as you saw in our performance during the league," he told Graphic Sports.

He, however, disclosed that the club was on the verge of securing a sponsorship deal with a yet-to-be-named company and that the deal would be announced this week after the details had been fine-tuned and concluded.

He further disclosed other plans such as the early recruitment of some quality players to avoid another struggle in the elite league next season.

''We are going to do early recruitment but because of lack of funds, we won't target any big names.

"Our focus will be on the lower division clubs,'' Alhaji Gruzah noted.

King Faisal finished on the 14th position on the league log with 41 points.

Alhaji Grusah also reiterated that the club's doors are still open to other corporate bodies who would like to partner them in the coming season to perform much better than they did last season.

He revealed that the club was saddled with debt but the benevolence of some individuals, including the Vice President, Dr Mahamudu Bawumia; the CEO of BOST, CEO of COCOBOD, Joseph Boahen Aidoo; Mr Asamoah Boateng; the Chief of Staff, Madam Frema Opare; some MPs such as Patrick Boamah and the Transport Minister, Mr Kweku Ofori Asiamah, helped settle it.

While expressing gratitude to these individuals for their support, he requested for more support to help build a formidable side capable of competing favourably with the big clubs in the league next season.