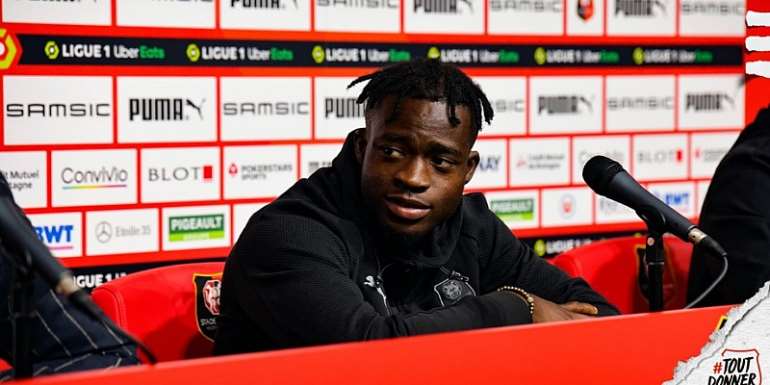 Ghanaian teen sensation Kamaldeen Sulemana has disclosed that he spoke to Michael Essien before signing for French Ligue 1 side French side Stade Rennais.

The 19-year-old joined the French Ligue 1 side last week Friday after completing his medicals on a five-year deal from FC Nordsjaelland.

The Ligue 1 side beat Dutch champions Ajax and other Premier League clubs to the signature of the enterprising forward.

The deal is a straight cash deal that will give Nordsjaelland an immediate amount of €16 million with a further €5 million to be added depending on the appearances the winger-cum-striker makes for the French side.

"I spoke with Michael Essien (editor’s note: assistant coach of Nordsjaelland) who played in Bastia and Lyon.," he said on Monday following his unveiling.

"He was able to tell me about Ligue 1. It is one of the best championships in Europe. It was a good opportunity. Stade Rennais FC will allow me to have playing time, more than elsewhere I think.

“From my first visit to the club, I had the opportunity to talk to the coach and the staff. I believe in this project.

"I think it’s a good choice for my career. Rennes is a big team, trainer of great talents. It’s a good place to progress," he added.

Kamaldeen Sulemana becomes the most expensive African teenager, breaking the record set by Nigerian international star John Mikel Obi when he joined the English side, Chelsea, from the Norwegian club Lyn Oslo for £16m which is about €18.5m.

The winger also becomes the most expensive Ghanaian teenager breaking the record set by his friend and former Nordjaelland team-mate Mohammed Kudus last year when he joined Ajax for €11million.

Kamaldeen becomes the most expensive footballer for Rennes breaking the €20million the French side paid for the Doku following his move from Belgian giants Anderlecht last season.

The Ghanaian is also the most expensive transfer for Danish side Nordsjaelland despite transferring Ajax star Kudus and Denmark Euro 2o hotshot Mikel Damsgaard to Sampdoria last year for nearly €8million.

He scored 10 goals and providing 8 assists in 29 appearances for Nordsjaelland.

Kamaldeen has two caps for the Ghana national team after making his debut in October 2020 in international friendlies against Mali and Qatar.