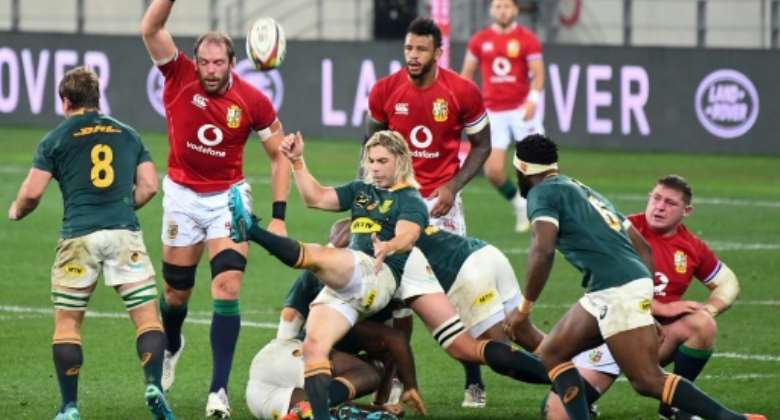 South Africa must come from one down in the series to beat the British and Irish Lions after losing the opener in Cape Town on Saturday. By RODGER BOSCH (AFP)

The Springboks will be seeking to defy history after losing the first Test against the British and Irish Lions at the Cape Town Stadium on Saturday.

Asked whether the South Africans could come back in the remaining two Tests after suffering a 22-17 defeat, coach Jacques Nienaber said, "Definitely. We have to salvage it."

But he admitted that the World Cup champions were outplayed in a second half in which the Lions scored 19 points and conceded only five.

It is the 14th Lions' tour of South Africa - and the team winning the first Test has gone on to win the series 12 times.

The only exception was in 1955, when the Springboks came back to share a four-Test series.

Nienaber and captain Siya Kolisi refused to use the disruption to their build-up by Covid-19 as an excuse but it was notable how the Springboks faded in the second half.

Both said they expected their team to benefit from having had their first challenging Test since the World Cup final in November 2019.

Seven of the home playing squad tested positive in the weeks leading up to the match and the full squad were only able to train together for five days before the game.

"We did not play a lot of rugby together but we still had cohesion in the first half," said Nienaber. "What happened in the second half was not because of Covid, we lost the battle in the air."

The pressure applied by the tourists was shown by an 8-1 penalty count in their favour in the second half.

"The discipline killed us," said Kolisi. "We did not get the maul going and they won crucial balls in the air."

Lions coach Warren Gatland said he expected the Springboks to come back strongly, although he did not believe they had been at a disadvantage because of their lack of action.

"Their players have all played rugby, it's not as though they haven't played any rugby the last two years," said Gatland.

"It's the same with us, we had a short preparation time putting a team together. We felt we've got better the longer the tour has gone on."

Gatland said the Lions could possibly make changes ahead of the second Test at the same venue on Saturday. "We may look at some different combinations," he said.

South African pundits pointed to the small margins that decided the game.

South Africa captain Siya Kolisi said 'discipline killed us' as the British and Irish Lions came back from 12-3 down at half-time to win the first Test in Cape Town. By RODGER BOSCH (AFP)

Former captain Jean de Villiers pointed out that the Springboks had crossed the Lions line three times, with only one try being awarded.

"But we didn't apply pressure with the mauls," he said. "They deserved the win."

Former world player of the year Schalk Burger backed the Boks to fight back.

"I'm not worried about the result," he said. "There are two games to go -- but what it does do is add pressure."

The Afrikaans-language Rapport newspaper focused on key refereeing decisions, claiming Lions replacement flank Hamish Watson should have been given a yellow card for a tip tackle on Willie le Roux.

The newspaper also said South African television match official Marius Jonker, a late replacement for New Zealand's Brendon Pickerill, should not have overturned the on-field decision of an earlier try by Le Roux.