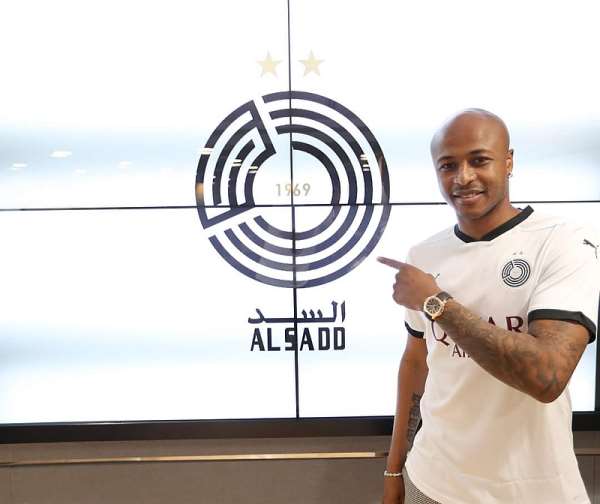 Ghana international, Andre Ayew is already craving for trophies after completing a move to Qatari side, Al Sadd.

The U-20 World Cup winner joined the Middle East club on a two-year deal as a free agent.

Ayew after joining the club said was “proud” to have joined the same team his father played for after he left Ghana.

Abedi played eight matches for Al Sadd after joining them from RTU and scored seven goals before moving to FC Zurich.

Andre pledged to give his all for his new club as they attempt to reclaim the Asian Champions League title they won in 2011.

“Proud moment for me and my dad to be able to represent the club that started his career outside Ghana. It’s an honour to wear the Al Sadd SC jersey. I will give my all to make our fans proud Inshallah let’s get started!” the tweet said.

Ayew’s move to the Qatari champions was completed on Thursday with the Ghanaian revealed as the club’s new Number 24.

The unveiling video had Andre’s father Abedi Ayew Pele chronicling his career which took him from RTU to Al Sadd before he moved to Europe.

At the end of the video, Andre Ayew said he was there to “continue his father’s legacy and win more titles” at Al Sadd.

Ayew was released by Swansea in June after a second-consecutive failed bid to return to the Premier League.

Swansea’s loss in the playoffs final against Brentford meant they would have to spend at least another season in the Championship.

This meant that the club could effectively not afford to keep Ayew on his wages, reported to be around 80,000 pounds a week.

There were mixed reactions from Swansea fans to the news that Ayew had been let go, with many acknowledging the impact he had on the team in his time there.

Andre Ayew finished as the club’s top scorer in the last two seasons and scored the winner in their playoffs semi-final first leg.

A host of European clubs, including Scottish giants, Celtic had been rumoured to be interested in signing the forward.

However, Al Sadd have won the race, initially announcing on Twitter that they had reached an agreement to sign the Ghanaian before confirming the completion of the deal on Thursday.

Ayew could earn over $220,000 a month at his new club according to reports.

Al Sadd have been champions of Qatar 15 times and won the league and cup double last season.

They also won the AFC Champions League back in 2011, which remains their sole triumph in the competition.

They are currently managed by Barcelona legend Xavi while former Arsenal midfielder, Santi Carzola is one of the side’s main players.