Tokyo Olympics: Is the USA 'Dream Team' era coming to an end? 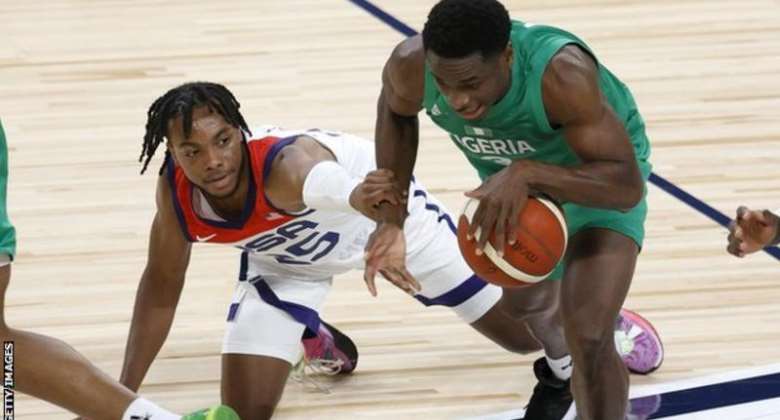 Following the inclusion of professional players in 1992, they have boasted NBA legends such as Michael Jordan, Larry Bird, Kobe Bryant and LeBron James.

But there are concerns these Olympics could be a repeat of the 2004 Games, where Argentina upset them in the semi-finals before going on to beat Italy.

The Americans have struggled in their preparations for Tokyo, suffering shock warm-up defeats by Nigeria and Australia, followed by back-to-back wins over Argentina and Spain.

Despite those victories, there are still problems for Gregg Popovich's team as Bradley Beal and Kevin Love were forced to pull out because of Covid protocols and injury respectively. Zach LaVine, though, has now been cleared to travel after initially being withdrawn through Covid protocols.

"I think I am going to play for the Tune Squad," said LeBron James following the Los Angeles Lakers' first-round exit in the NBA play-offs.

Preferring to promote the sequel to the Space Jam movie this summer, it will be the second straight Olympics without the two-time gold medallist - and he will not be the only top star missing.

Anthony Davis has not recovered from a groin injury that kept him to a very limited role in the Lakers' series loss to Phoenix Suns.

Seven-time NBA All-Star Stephen Curry, who has yet to win an Olympic gold medal, has also opted out.

It seems the biggest names are now prioritising rest and recovery in order to prepare for another run at the NBA championship.

But it would be unwise to dismiss the quality this team boasts. They still have six-time All-Star Damian Lillard, Boston Celtics forward Jayson Tatum and NBA Finals MVP Kevin Durant in their ranks.

"These international teams are experienced and we are still working at becoming a team" said Lillard after their 91-83 loss against Australia.

"None of us have ever played with each other. We're just trying to figure it out," said Tatum after their 90-87 defeat by Nigeria, which showed Team USA are struggling to hit their stride as a unit.

That problem may get worse when Jrue Holiday, Khris Middleton and Devin Booker arrive after playing in the NBA Finals, with Popovich unsure of how they will fit in.

Lillard added: "We're not just going to roll the ball out and beat these teams. These teams have a starting five of NBA players now."

That was true of their Australian opponents, with the Boomers able to call upon Patty Mills, Joe Ingles and Matisse Thybulle.

There is also an abundance of NBA talent among the other nations. Slovenia are led by Luka Doncic and France's talent is highlighted by three-time defensive player of the year Rudy Gobert.

But the biggest strength for these teams is their familiarity. They have mostly been able to keep the core of their players together for multiple competitions, helping them build much-needed chemistry.

While the USA still possess the best players at the Olympics, it seems their place at the top of the podium is under serious threat.

Team USA women's basketball side will be chasing a seventh straight Olympic gold when their tournament starts on 27 July.

They have won their last 49 Olympic matches - a run stretching back to Atlanta in 1996 - but have suffered the same issues as the men in their preparations.

It is still a team with so much quality, including seven first overall WNBA draft picks led by Diana Taurasi and Sue Bird, who have racked up eight Olympic and seven World Cup gold medals between them.

"USA Basketball has never been in a better place," said US Olympic team head coach Dawn Staley prior to the team's three warm-up encounters.

But it didn't take long for concerns to surface as they lost back-to-back games against the WNBA All-Stars and Australia.

A hip injury has also meant Taurasi, 39, is yet to play, but the team will still benefit from her experience and leadership off the court.

There was welcome good news with a 93-62 success in the final warm-up match against Nigeria, who they will face in their opening match in Tokyo.

And despite their wobbles, Staley's side are still favourites to triumph when the contest ends on Sunday, 8 August.