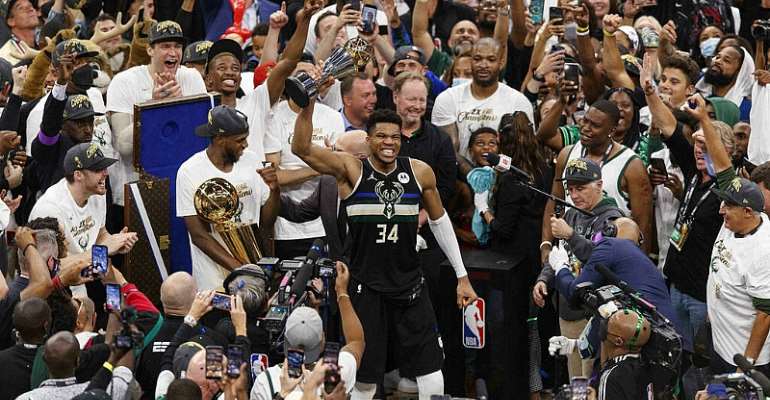 The symmetry was as salient as his brilliance. Giannis Antetokounmpo scored 50 points on Tuesday night as the Milwaukee Bucks claimed their first NBA title for 50 years at the expense of the Phoenix Suns.

Nearly 20,000 partisans inside the Fiserv Forum in Milwaukee celebrated wildly along with another 65,000 lining the streets outside the arena.

"I'm happy I was able to do it with this team for Milwaukee," said Antetokounmpo who also hoisted the accolade as the most valuable player (MVP) of the series.

Comeback
The Bucks became only the fifth team to claim the crown after losing the first two matches.

"I never thought I'm going to be 26-years-old, with my team playing the NBA Finals," Antetokounmpo said. “I never thought I would be sitting here with the championship and MVP trophies. We've come a long way."

Antetokounmpo, who was born and raised in Athens to Nigerian parents, joins Dirk Nowitzki, Tony Parker, Tim Duncan and Hakeem Olajuwon as the only international players to be named NBA Finals MVP.

"The way he made his free throws, the way he did everything, stepped up, the poise, the confidence, the leadership ... He's off the charts.

"I've learned so much from him. He's a special leader and a special human being."

Bucks centre Brook Lopez echoed Budenholzer's admiration. "I don't know how many words you need to use beyond: '50 points in a close-out game in an NBA Finals'. Pretty much sums it all up.

"It's so indicative of who Giannis is as a player, as a person. He has that mindset always to just take care of business."

"I want to thank Milwaukee for believing in me," Antetokounmpo added.

"I want to thank my team-mates for playing hard with me."

Suns coach Monty Williams said: "I've never dealt with this kind of hurt as a head coach. There's just a pain that goes with your season being over. I know this is going to hurt for a while."