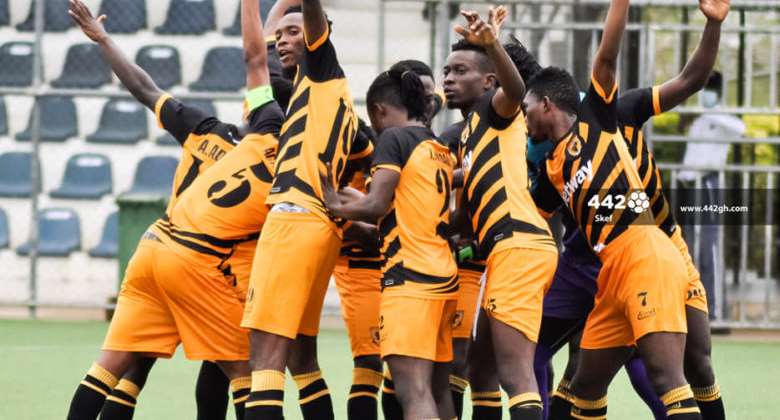 It rained goals at the Obuasi Len Clay Sports Stadium on Saturday afternoon when Ashanti Gold SC run riot over Inter Allies FC with a heavy 7-0 win in the Ghana Premier League.

The Miners despite their struggles in the 2020/2021 Ghanaian top-flight league campaign have managed to pick themselves up in the tail end of the campaign.

On the back of two wins in their last five matches, the team today hosted relegated Inter Allies FC in the final Ghana Premier League game of the season.

Dominating the first half, Ashanti Gold SC deservedly led at the break by three goals through a brace from Isaac Opoku Agyemang and an equalizer from Amos Addai.

Later in the second half, Amos Addai netted his second in the 50th minute before Opoku Agyemang also found the back of the net to make it 5-0.

Courtesy of two own goals from Hashmin Musah, Ashanti Gold SC have cruised to a 7-0 heavy win at the end of the 90 minutes to finish 9th on the Ghana Premier League table.