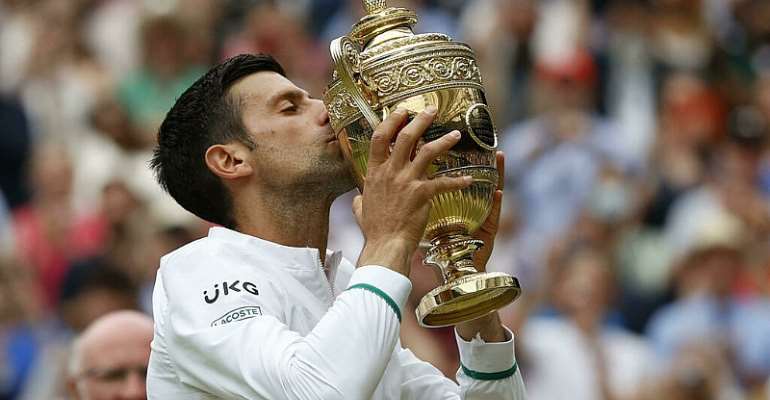 Novak Djokovic wore down Matteo Berrettini on Sunday to win the Wimbledon crown for a sixth time and move level with Roger Federer and Rafael Nadal as the owner of 20 Grand Slam tournament titles.

"Roger and Rafa are legends they are the reason I am where I am today," said Djokovic after receiving the trophy.

Federer - who was eliminated in the quarter-finals - welcomed the 34-year-old Serb to the record-holders club.

"Congrats Novak on your 20th major," he tweeted. "I'm proud to have the opportunity to play in a special era of tennis champions. Wonderful performance, well done!"

The top seed started his march towards an 85th career title in fine fettle. He broke Berrettini n early and at 5-2  just over half an hour into the fray, he had a set point on the Italian's serve.

Courage
But the 25-year-old, who was playing in his first final at a Grand Slam tournament, displayed verve to fend it off and win the game. His fortunes then improved

Serving at 5-3, Djokovic cracked.
He saved a break point with a slick forehand winner into Berrettini's backhand but offered up a second soon after.

Berrettini gleefully accepted the offer bunting a forehand down the line past a stranded Djokovic to reduce the deficit even more.

He levelled for 5-5 and went on to take the set in the tiebreak by seven points to four after 67 minutes.

From that high, it was a chronicle of a death foretold.

Surge
Djokovic racked up a 4-0 lead in the second set within 20 minutes. The match was all-square 23 minutes later.

After breaking to lead 2-1, Djokovic, moving silkily as he scented the prize, maintained his advantage to notch up the third set 6-4.

Untroubled on his own serve, it became one-way traffic for him from the middle of the fourth.

The world number one won four games on the trot to join his decorated rivals in the pantheon of tennis.

"Novak is a great champion he is writing history on this court," said Berrettini. "It is not the end it is the beginning for me."

With his third consecutive major after he Australian and French Open adorning his 2021 trophy cabinet and exuding transcendence, Djokovic may well be harbouring the same sentiment.