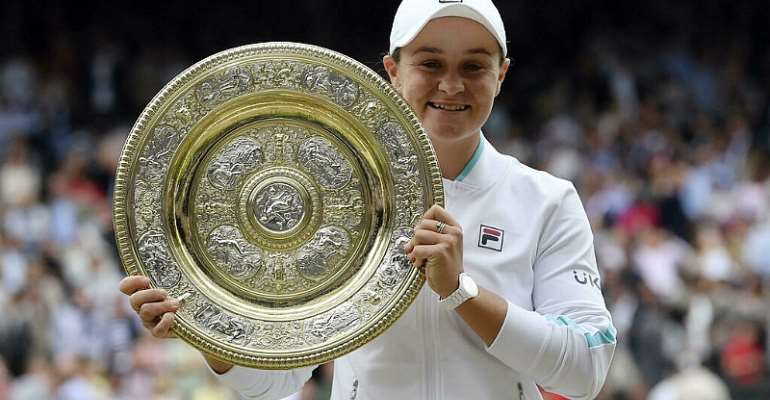 The match finished 6-3, 6-7, 6-3 after nearly two hours of enthralling skirmishes to give Barty her second Grand Slam tournament crown just over two years after lifting the 2019 French Open.

Pliskova, a runner-up at the 2016 US Open, started her second Grand Slam tournament final abysmally.

She lost the first four games and Barty served for the first set at 5-1 up.

But the 25-year-old Australian fluffed her lines and dropped her serve.

Pliskova held to make it 5-3 and rack up the pressure on the top seed.

Success
However, at the second time of asking, Barty won the set.

She claimed the early advantage in the second set to lead 3-1 but Pliskova fought back to 3-3.

Serving at 5-5, Pliskova was a point away from nudging 6-5 ahead but netted a routine backhand volley.

Within minutes, Barty had turned the tables and won the game.

Reprieve
But in a mirror image of the first set, she failed to exploit her good fortune and claim the title.

Pliskova, reprieved, swept through the second set tiebreak seven points to four to force a decider.

If it was a case of deja vu for Barty, Pliskova was aping her to imperfection.

She dropped her opening service game to hand Barty a 2-0 lead.

And from then on could not create any openings to draw level until Barty served for the title for a second time at 5-3.

At 30-30, Barty dumped a volley into the net to give Pliskova a break point.

But it went. And two points later, her dreams of the crown had gone too.

Generosity
The 29-year-old was munificent in defeat. "Ash played an incredible tournament and an incredible match today," she said after receiving the runners-up trophy.

"I was fighting very hard to make it difficult for her but I think she played very well, so congrats to her and her team.”

Barty becomes the first Australian woman to lift the Venus Rosewater Dish since her idol and mentor Evonne Goolagong Cawley in 1980.

"This is incredible," said Barty. "I genuinely have to thank every single person in this stadium. You have made my dream so special, so thank you so much.”