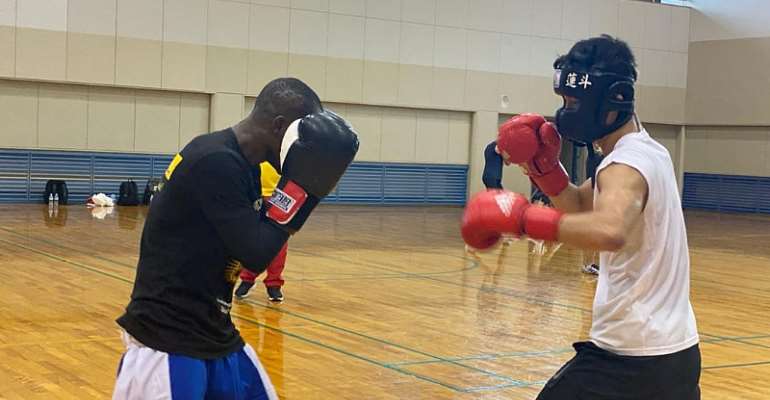 The Black Bombers of Ghana on Monday and Tuesday engaged their Japanese counterparts to sparring sessions in Inawashiro, Fukushima ahead of the Tokyo 2020 Olympic Games.

The sparring programme which came as a request from the Japanese coach saw both teams putting up superb performances on Monday, however, the fighting session on Tuesday saw the Bombers slightly ahead giving Coach Doctor Ofori Asare an insight into what he should expect when nations get ready to rumble at the XXXII Olympiad.

The three Ghanaian amateur pugilists put up a highly spirited display which was admired by the Chef de Mission of Team Ghana, Mr Mike Aggrey who watched the training judiciously.

He later said the Black Bombers stand the chance of winning medals in boxing as he anticipates fair officiating.

He charged the boxers to go for noting than the medal zone and prove that indeed Ghana is a boxing nation.

The Japanese coach hailed the technical men and boxers from Ghana for the display of sportsmanship.

The Games would be opened by Emperor Naruhito at the Olympic Stadium in Tokyo.