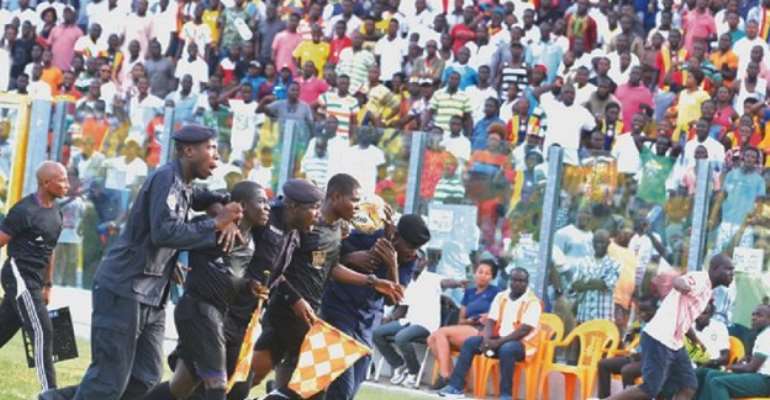 Football as most people say is the passion of the nation but when it attracts hooliganism at match venues, the passion becomes the killer of the beautiful game.

Ghanaian football over the years has been tarnished greatly by the almost regular activities of violence at the various stadia without having proper solutions to such shameful behaviour.

The Ghana Football Association (GFA) who are tasked with the responsibility of ensuring the organisation of football at all levels have really not been so productive and proactive in curbing the menace of hooliganism at match centres.

In as much as the GFA mostly ban venues that experience violence over a period of time as punishment, people can attest to the fact that, that directive has done little or no good to stopping violence. It is clearly not enough to just ban object (stadium) without the subject (culprits).

Since the start of the 2020/2021 football season in Ghana, we’ve been met with various degrees of violence at match venues with the latest happening at Dawu and Sunyani Coronation park. As the knowledge of the beautiful game keeps growing, one would have thought the throwing of missiles at match officials and beating them up had nothing to do with football. However, this is sadly the case at some stadia which somewhat provides a conducive atmosphere for such barbaric activities.

Measures to ensure hooliganism is halted at match venues:

The GFA must first of all understand that the ban of stadium has never scared away hooligans from perpetrating their evil acts. It is about time culprits are arrested and prosecuted for actions. The reason we keep seeing such incidents is that culprits know they will always go scot-free while the club only suffer sanctions. However, when arrests and prosecutions are made, it serves as a deterrent to others to refrain from violence.

Another important initiative to deploy is ensuring that the clubs and officials who are caught in the act are given stringer punishment like points deductions and ban on particular club officials at fault.

In addition, the FA must task the clubs to orient their fans on the necessity of avoiding stadium violence and also knowing the repercussions their clubs may suffer as a result of their actions.

The FA must finally corporate well with security urgencies to ensure there is adequate security at match centres for the protection of every club and match officials against potential crowd violence.

Hottest Photo Reports
Catch up with all the political quotes from our politicians.
Advertise here
More Opinion
ModernGhana Links
Three reasons why Ghana must talk to former Atletico Madrid midfielder Bernard Mensah out of his decision to quit the Black Stars
EPL or EPL
Ghana Football eclipsed by indecision and procrastination?
Top 6 Ghanaian football starlets to keep an eye on
What next after C.K. Akonnor's dismissal?
FEATURE: Hearts of Oak must start preparation now ahead of CAF Champs League
Baba Rahman: Is there a Chelsea future for Ghana star under Tuchel?
Has Barcelona found Carlos Puyol’s heir?
FEATURE: Plummeting careers of the 2013 Satellites heroes
TOP STORIES

Alliance of CSO petitions Parliament for audience with GNPC ...
40 minutes ago