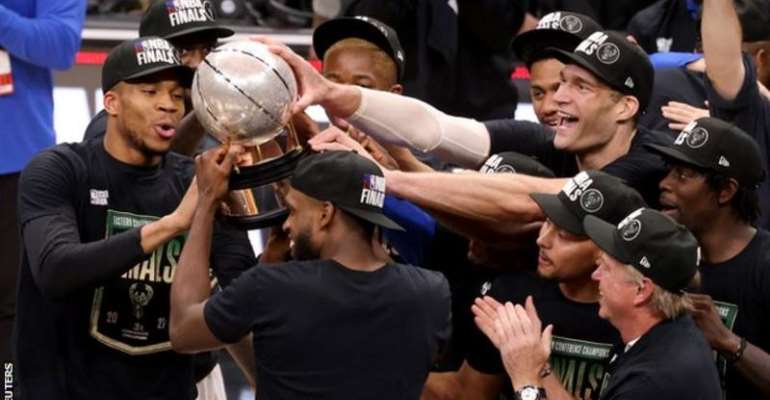 The Milwaukee Bucks reached the NBA Finals for the first time since 1974 by overcoming the Atlanta Hawks to win the Eastern Conference title.

They will play Western Conference victors the Phoenix Suns in the final.

The first game in the best-of-seven series will take place in Phoenix from 02:00 BST on Wednesday.

Middleton was again key for the Bucks as he scored 16 straight points - and 23 in total - for his side in the third quarter to give them a 91-72 lead going into the final period.

''My teammates and my coaches, they told me to keep being aggressive,'' said Middleton.

Trae Young was back after two games out with a foot injury for the Hawks but managed just 14 points, with team-mate Cam Reddish scoring a team-high 21 points for the home side.

"I didn't want to go and not play and think to myself all off-season what if I could have been out there and played," said Young.

"It would have hurt me so I just decided to go out and play and leave it all out on the floor."

The Suns will have home advantage for the finals series as they had a better record in the regular season.

It remains to be seen whether two-time NBA Most Valuable Player Antetokounmpo will have recovered from a knee injury to play.

"They have a focus and an edge," said Bucks coach Mike Budenholzer after his team's win.

"That's put us in a position to keep playing. That's impressive, but we've still got more work to do."