Abeiku Jackson optimistic of improving his time in Tokyo 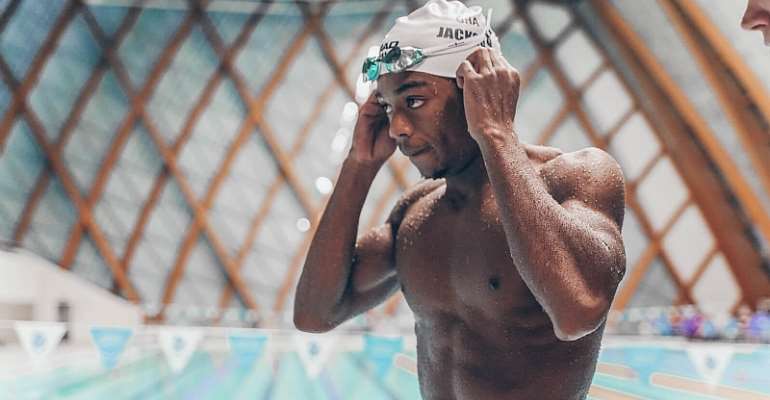 In an exclusive chat with Yours Truly at the Team Ghana training camp in Inawashiro Fukushima, he said the training he is undergoing in Kazakhstan has helped a lot and looking forward to shock swimmers and swimming fans.

"I want to do 52 seconds, that is my target and I am very optimistic of raising the flag of Ghana in international swimming," he said.

On his recent feat of beating the European champion, he explained that he won the competition but did not beat the personal best of the champion which is 51 seconds.

He expressed that in swimming, it is a great achievement to drop seconds, and he will try his best to drop his time.

He noted that his new abode has helped him tremendously and thank the Ghana Olympic Committee GOC and FINA, the international swimming body for the support.

Abeiku Jackson is considering adding the 200 meters freestyle to his events.

His local coach Dan Opare who is in Inawashiro noted that they are very sure of improved performance and hoped that Ghanaian swimming lovers will pray for him.

Meanwhile, Unilez Yebowaah Takyi born in 2004 who is based in Italy has replaced Zara Forson for the 2020 Olympic Games as she has amassed more points than most female swimmers. She will do the 50 meters freestyle, which is her favourite.

She also told Yours Truly, this is her first Olympic experience, though she competes in Italy and she will make good use of the opportunity.

She thanked the Ghana Swimming Association for believing in her and selecting her to represent Ghana.

She was born to Ghanaian parents in Italy and feels honoured to compete for her motherland.

The new President of the Ghana Swimming Association, Mrs Delphina Quaye who is a member of the GOC Executive Board is in Japan with Team Ghana and she feels her presence will inspire the two swimmers to perform better.