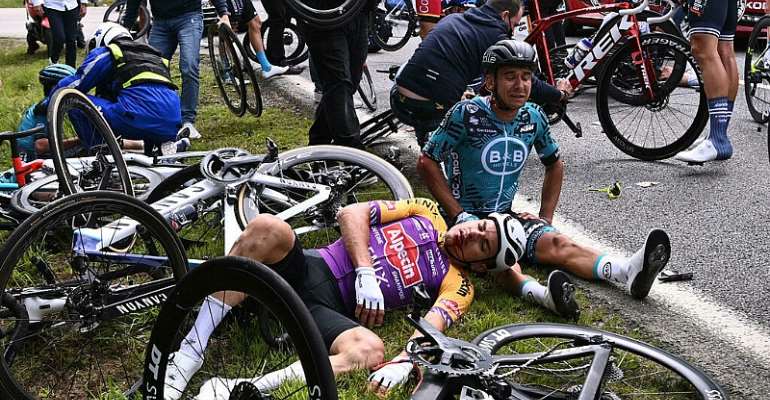 A woman whose roadside stunt during the first stage of the Tour de France between Brest and Landerneau in north-western France led to a pile-up of riders was arrested on Wednesday in Brittany.

Camille Miansoni, the state prosecutor for the city of Brest, confirmed that a suspect had been taken into custody.

The 30-year-old, who has yet to be named, is expected to be charged with causing unintentional short-term injury through a manifestly deliberate breach of a duty of safety or care.

As well as possible legal action from the race organisers, she faces a fine of up to 1,500 euros and could also be sued by the cyclists who were injured in the crash after she edged onto the race route to face the TV cameras but with her back to the advancing bunch of cyclists.

The German rider Tony Martin collided with the sign and was the first to fall. As a tangle of bikes and bodies ensued, the woman was seen shuffling into the roadside crowds with her panel folded away.

Protest
The incident and subsequent crashes on the second and third stages of the race angered teams and led to the entire peloton staging a protest at the start of Tuesday's fourth stage between Redon and Fougères.

Riders all came to a stop for a brief period, before setting off again at a leisurely pace.

Pierre-Yves Thouault, the deputy director of the Tour de France, told AFP news agency that organisers intended to seek damages from the culprit.

"We are doing this so that the tiny minority of people who do this do not spoil the show for everyone," he said.

Writing on Instagram after the crash, Martin thanked cycling fans for their support. And he criticised people at the roadside who regard the Tour de France as a circus.

"Please respect the riders and the Tour de France!" he wrote. "Use your head or stay home."

Defending champion Tadej Pogacar claimed the fifth stage time trial on Wednesday between Changé and Laval Espace Mayenne to move up to second in the overall rankings behind Mathieu van der Poel.