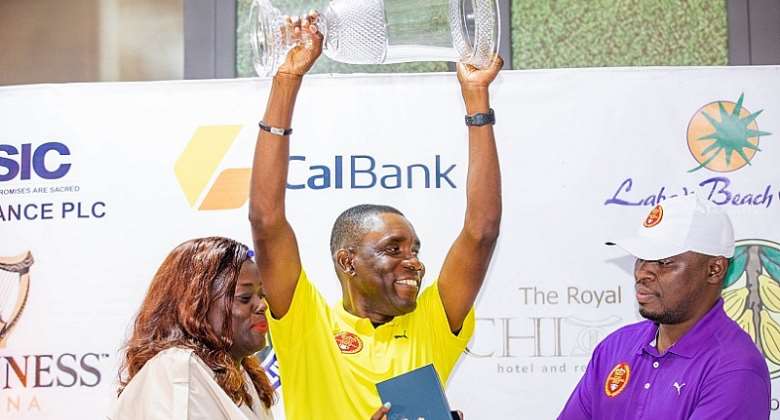 Benjamin Dablaa emerged the winner of the Men’s Group A category of the 2021 Head of State Golf Tournament held at Achimota Golf Club on Saturday. He scored a handicap of 8, over gross of 74 and net of 64 points.

Second place went to Thairu Ndungu who scored a handicap of 11 with a gross of 77 and net of 66, while Carl Brew-Aidoo took the third position over a handicap of 8, grossing 78 and net of 70 points.

Fourth position was taken by Ryan Sicogh who had a handicap 8, grossing 78 and netting 70 points and fifth went to Madji Joher getting a handicap of 3, gross of 74 and net of 71 points.

With the Auxilary Prizes, the longest drive went to Yaw Afriyie and Liticia Amponsah - Mensah respectively.

Closest to the pin prize was taken by Harold Agbenu and Mercy Werner respectively.

The Head of State Golf event was well attended by personalities including the Minister of Youth & Sports, Hon. Mustapha Ussif.

He commended the splendid organisation and congratulated the winners.

The third in the series was under the distinguished auspices of the President of the Republic of Ghana, His Excellency Nana Addo Dankwa Akufo Addo.

This year's event had as its theme, TRANSFORMING THE NATION THROUGH GOLF, in addition to being in honour of the President, and designed to bring together the Executive arm of Government and leaders of Corporate Ghana to aligning bringing ideas for national development.