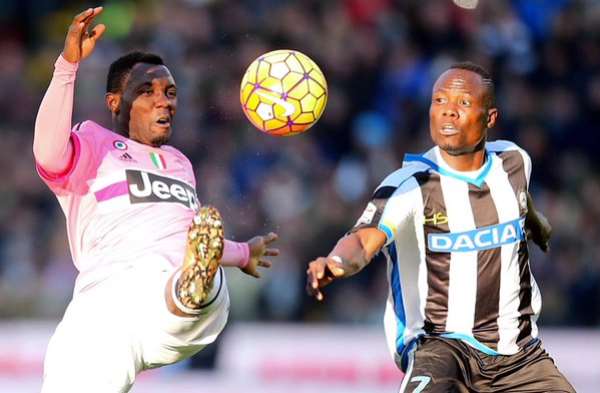 Former Ghana and Hellas Verona midfielder, Emmanuel Agyemang-Badu has revealed how fellow countryman Kwadwo Asamoah helped him to settle into life in Italy.

Badu landed a loan move to Recreativo in Spain, the same year before switching to join Italian Serie A side Udinese in 2010 where he spent most of his playing career.

The former Asante Kotok and Berekum Arsenal midfielder who says he struggled with language on his first trip to Italy, has thanked Asamoah, who was then playing for Udinese for helping him to settle out.

“Fortunately for me, when I joined Udinese I met Kwadwo Asamoah there and he was my senior at the national team, he really helped me to settle well because of the language barrier he was the one talking to me,” Badu told GHOne TV.

“Whatever information the coach gives at training he explains to me, he will take me out for lunch, dinner, and when I want to buy something he will just help, when I want to send something to my family he will help me out.

“Gradually I became comfortable with the language so Asamoah helped me to settle well in Italy and am grateful.”

On his overall experience in Serie A, Badu said: “Italian Serie A is very tough but at the time I was leaving Ghana to Europe I was already playing for the Black Stars and playing with players like Sulley Muntari, Michael Essien, John Paintsil, Asamoah Gyan and other experienced players, I think I was having the experience so I didn’t suffer a lot to gain the experience to play in the Serie A.”

Currently unattached, Badu is on the lookout for a new club after parting ways with Hellas Verona last year but in a recent interview, the player said he will also consider venturing into coaching when he hangs up his playing boots.

“Coaching is an option but I would love to be a scout for a club. If I can be a scout for [former side] Udinese [on whose books he was from 2010 until last year] in Africa, it will be very wonderful,” Badu said.

“I have a good relationship with Udinese so I can speak to them and see how it goes. I know a lot of coaches in a lot of clubs.

“Coaching is my second option. I am not ready to be a CEO of a club because I don’t have experience at that level.”

Earlier in January, Badu also announced his retirement from international football with Ghana, another indication that his career is nearing its end.

Badu joined Verona ahead of the start of last season on a season-long loan with an option to buy and he made 10 appearances for the side in Serie A, his time in Verona heavily weighed down by health and fitness issues.

Badu previously played for Bursaspor in Turkey among other clubs.

The 30-year-old, who was part of the Black Starlets squad that took part and won the 2009 Fifa U20 World Cup staged in Egypt.