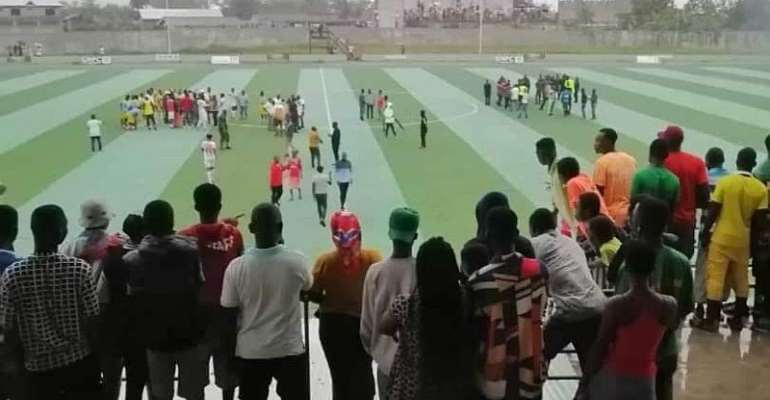 A little over a month ago the 20th anniversary of the May 9th stadium disaster, the calamitous incident that claimed 127 lives after a Hearts-Kotoko league match at the Accra Sports Stadium in 2001, was marked. A committee was formed to ensure the commemoration of the anniversary.

Sorry to say, it was an irrelevant committee. Two decades following the tragedy, both the state and the Ghana Football Association (GFA) have done so little to progressively deal with violence in the game. Why a committee would be set up to plan how wreaths would be laid and trite commemorative messages weaved around the refrain 'never again' would also be read, and by who, came as a waste of time to me but why not, when that’s all we’ve done for 20 years.

Lip service has been paid to ensuring that football violence is minimised. Anytime violence rears its ugly face, the GFA applies sanctions – ban the violent venue and further punish the club involved. That’s all we’ve sought to do in combating the hooliganism monster. Criticism of the GFA over its fight against violence is often met with the retort that, they aren’t the Police who must keep law and order.

The GFA President, Kurt Okraku, on Joy FM recently validated that view, saying, he’s not the Inspector General of Police (IGP). Efforts to polish Kurt’s gaffe fell flat, for, his was a poor reaction to a matter as serious as hooliganism. He didn’t have to remind us he’s not the IGP. His answer was as unimpressive as the Police’s attitude to fight football violence. No arrests. It’s boring recounting examples but this season alone Dwarfs’ coach was confined to a wheelchair after Berekum Chelsea fans beat him.

Some officials of Asante Kotoko have been violently chased out of Dormaa, fans have as well broken a gate at the Accra Sports Stadium (Hearts vs Olympics). Just last Sunday, Karela United fans also attacked Medeama players and officials in their FA Cup round of 32 games, leaving a player with a bloodied face.

The GFA has been swift to ban the Karela United venue but no matter what the FA’s rules say, venues aren’t the problem but rather, the fans who vent their spleen on players, referees, coaches etc. sadly, in our football, hooligans don’t get arrested and prosecuted. How do we fight violence in our game like that? It’s true the GFA isn’t clothed with the powers to arrest and prosecute hooligans but why the Police, whose lawful duty it is, don’t also arrest and bring these goons to book, well underscores why we can’t win the fight against violence in the game.

In less than a week’s time, the Super Clash will be on. Hearts vs Kotoko. With the two teams tied on same points and thus caught up in a thrilling neck-to-neck race, against the backdrop of evidence of poor security at the Accra derby, what plans have the Police and the GFA to contain any security breach? Indeed, my question is, why do the Police fail to make arrests in virtually all instances of violence at our matches? How secure are our match venues? Are venues the problem or the fans? Do tell me if you know.