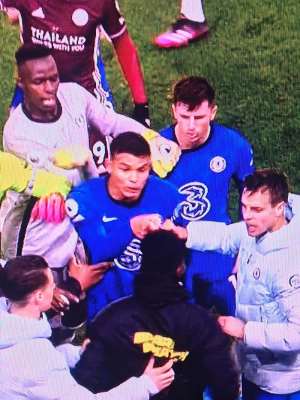 Chelsea leapfrogged Leicester into third in the Premier League table following the victory and the Foxes now risk losing out on a top-four place with fifth-placed Liverpool three points behind with two games left to play.

A scuffle broke out between the two sides in injury time at Stamford Bridge with Thiago Silva, Cesar Azpilicueta and Mason Mount all clashing with Ghana international Amartey.

Rudiger admits there was tension heading into the game and he called out Amartey after a video showed him posing with a Chelsea pennant before throwing it on the ground during Leicester's FA Cup celebrations.

He added that he is pleased Chelsea avenged their FA Cup final defeat on Saturday by beating the Midlands club on Tuesday evening.

"We wanted to show to them because top four was on the line and unfortunately some people from them don’t know how to celebrate," Rudiger told Chelsea TV.

"We had to punish them for this. After we lost the final we talked with each other, that its a massive game coming up and are on it

"Some people from them gave us a bit more motivation.

"Congratulations to them, they won [in the FA Cup final], celebrate and everything. But don't disrespect the club history. This is a bit bigger than you,"

Meanwhile, Chelsea boss Thomas Tuchel insists he did not use Amartey's actions as a way of motivating his players going into the important Premier League clash.

He said: “I did not talk about it. I know there was an incident but I didn’t talk about it before the match or in any meetings, I don’t do this but I think the players were well aware.

"I’m not into these things too much because it can sometimes give you too much energy, too much a feeling for revenge. I don’t like this at all."